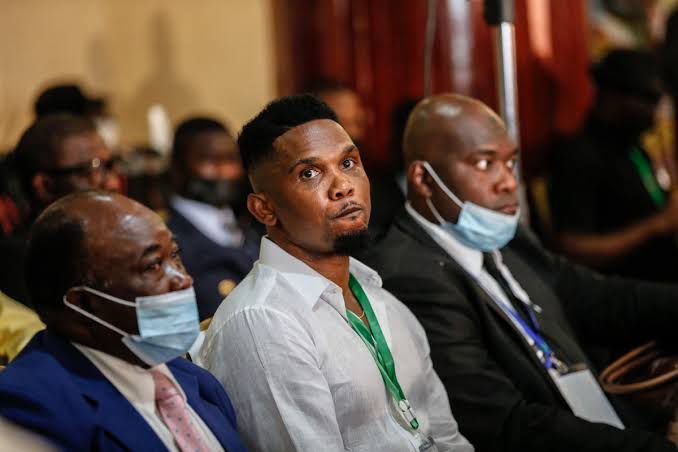 Former Barcelona and Chelsea Cameroon forward Samuel Eto’o has pleaded guilty to a £3.2m tax fraud relating to his image rights after he transferred his image right to a company in Hungary while playing for Spanish side Barcelona.

Samuel Eto’o was ordered to repay all £3.2m tax money plus £1.55m FineThe four-time African footballer of the year was given a 22-month suspended prison sentence when he appeared in court in Spain on Monday.

Samuel Eto’o has been ordered to repay the money he owes, along with a fine of £1.55m.Prosecutors accused the former Everton player of failing to declare income from the transfer of image rights between 2006 and 2009.

Eto’o is the latest in a long list of foreign players and managers to have been prosecuted for tax fraud in Spain in recent years, including Cristiano Ronaldo, Lionel Messi, Jose Mourinho, and Brazilian star Neymar Jnr.

The 41-year-old, who is now the president of the Cameroonian football federation, joined Barcelona in 2004 when he was 23.He also played for Real Madrid, Inter Milan, Chelsea, and Everton during his career, before retiring in 2019.

He appeared at the Ciudad de la Justicia court in Barcelona with his former agent Jose Maria Mesalles, who was given a 12-month suspended sentence and a fine as well.

The court heard that Samuel Eto’o transferred his image rights to a company based in Hungary which declared his earnings in that country, where the tax rate is one of the “lowest in Europe”.