Nigeria qualify for 2023 U17 Africa Cup of Nations 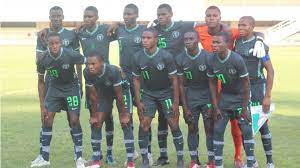 Having reached the final of Wafu-Ufoa Zone B qualifiers, the Golden Eaglets will be participating in the biennial African youth tournament next year

Nigeria have qualified for the 2023 U17 Africa Cup of Nations after defeating Cote d’Ivoire 3-1 in the semi-final of the Wafu-Ufoa Zone B qualifiers played on Tuesday evening.

A brace from Emmanuel Michael and Abubakar Idris Abdullahi’s strike powered the Golden Eaglets past the Little Elephants at the Cape Coast Sports Stadium, Ghana.
Having finished as Group A winners thanks to a 4-2 victory over Ghana and a 3-1 win over Togo, Nduka Ugbade’s boys set up a date with Cote d’Ivoire – who finished as Group B runners-up.

Despite being tipped as favourites to advance, it was Nigeria who conceded first after Yan Diomande scored from the penalty mark in the very first minute following a foul on the Ivorian striker.

Two minutes before the half-time break, Nigeria took the lead for the first time as Michael got a brace with another well-taken free-kick.

Even with a more determined approach by Cote d’Ivoire, it was the Golden Eaglets who added a third goal Abdullahi found the net with a nice header.

With two minutes left on the clock, the Ivorians were reduced to ten players after Makhete Moustapha N’diaye was shown a red card for dangerous play.

Nigeria will now face either Ghana or Burkina Faso in the final billed for Friday.

“I am happy with the squad that we have been able to come up with, and I can say confidently that we are going to Ghana to do the nation proud,” Ugbade was quoted in an NFF statement made available to GOAL before the competition.

“Our primary objective is to earn a ticket to the Africa Cup of Nations, and then we go full throttle for the trophy. Nigeria have a pedigree in U17 football, and we cannot afford to disappoint.”

Nigeria are the most successful country in the world having won the U17 World Cup competition a record five times.

The West Africans last featured at the global football showpiece in Brazil 2019. There, they crashed out in the Round of 16 following a 3-1 defeat to the Netherlands at the Estadio Olimpico, Goiania.
(Goal)