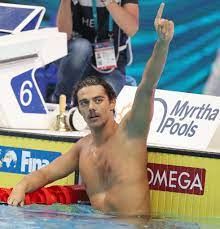 Italy’s Thomas Ceccon smashed the world record to win gold in the men’s 100m backstroke at the World Championships in Budapest.

But Ceccon enjoyed centre stage with his stunning effort.

“I have no words, there was an Olympic champion in 2016 (Murphy) and other strong people in the field, I’m pretty happy,” he said.

“I didn’t think of any record or time before the start, I just swam my own race. For me, it’s simply unbelievable.”

She pipped Germany’s Anna Elendt by just 0.05secs to become the youngest Italian to win a world title and Lithuania’s 2012 Olympic champion Ruta Meilutyte was third.

“I’m super happy, it was my dream and it came true tonight,” said an emotional Pilato as she broke down in tears, unable to finish her post-race interview.

American Katie Ledecky, 25, dominated the women’s 1,500m freestyle to claim her second gold of the championships.

Ledecky, who won the women’s 400m freestyle on the opening day, cruised to victory in 15 minutes and 30.15 seconds.

Britain’s Freya Anderson, 21, swam a personal best of 1:56.05 seconds to qualify fastest for the women’s 200m freestyle final on Tuesday.