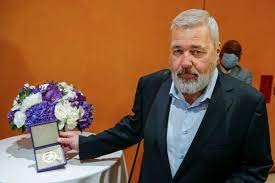 Dmitry Muratov, the Russian editor-in-chief of the independent newspaper Novaya Gazeta, has auctioned off his Nobel Peace Prize medal for a record $103.5m to help Ukrainian children displaced by the war.

The gold medal was sold to an as yet unidentified phone bidder at the sale in New York, which was organized by Heritage Auctions.
The sale was spirited, with lots of applause and bidders egging one another on to increase the total. Muratov was seen recording videos of the bidding screen and those in the room.

When the final bid came in, at tens of millions of dollars more than the previous offer, many in the room expressed shock, including Muratov himself.

“I’m just like you in that regard,” he told the Agence France Press news agency, speaking through a translator after the sale. The previous high for the auction of a Nobel medal was just under $5m, according to media in the United States.

Muratov, a fierce critic of Russian President Vladimir Putin and his government, was the cowinner of the prize with Maria Ressa of the Philippines last year.
Russia’s more liberal media outlets have been under continuous pressure since Putin first became leader in 1999, but the situation has intensified since Moscow invaded Ukraine on February 24.

Muratov’s Novaya Gazeta newspaper, which he cofounded following the fall of the Soviet Union, suspended operations in Russia in March after warnings from the state over its coverage of the war in Ukraine.

The following month, the prominent journalist was attacked on a train when someone threw oil-based paint mixed with acetone on him, causing his eyes to burn.
Speaking in a video released by Heritage Auctions in connection with the sale, Muratov said that winning the Nobel “gives you an opportunity to be heard”.

“The most important message today is for people to understand that there’s a war going on and we need to help people who are suffering the most,” he said.
(News Agencies)

Police instructs Portable to Report himself