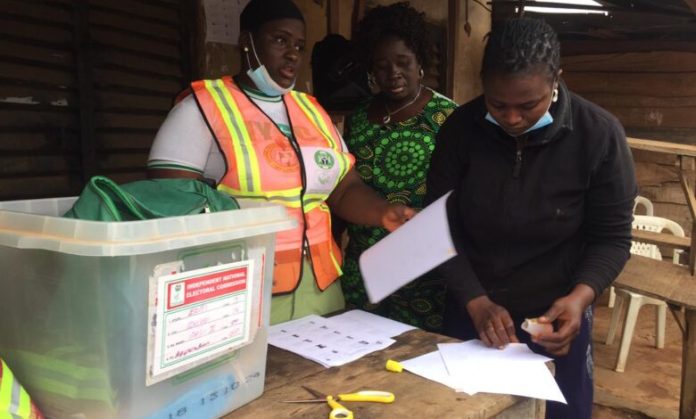 Reflecting on the overview of the recent Governorship electíon in Ekiti state, the people of the state say that by and large, they have every cause to bask in the euphoria of conducting a relatively peaceful poll in recent times and the political history of Nigeria.

In the results of the election announced by the Returning Officer, Prof. Oyebode Adebowale, 55-year-old Mr. Biodun Oyebanji of the All-Progressives Congress (APC) emerged the winner securing 187,057 votes.

The peaceful nature of the election came against the backdrop of the rumor that hell would let loose during the exercise as political crisscross the length and breadth of the state canvassing and wooing voters.

The positive turn out of exercise poll political pundits describes as cheering news not only for Ekiti state but the nation at large, saying that it potent what will likely happen in the 2023 general elections.

Eyewitnesses at the election in Ado-Ekiti, the state capital, such as Timothy Olorunfemi, and John Obatoyinbo, agree that the June 18 election is a litmus test and a reinforcement of hope that, Nigeria is on a course of getting it right to the concept of organizing the free, fair, and credible election.

This, they contend, would however be possible, if politicians learn the lessons derived from the latest poll to better similar exercises in the future elections.

The view of most participants in the exercise receives the acknowledgment of the two major political parties in the state whose members expressed delight in the poll.

A chieftain of the All-Progressives Congress (APC) in Ekiti State, Hon. Kayode Babade described the electíon as a reflection of the true wishes of the people.

Babade, an APC agent at the Independent National Electoral Commission (INEC) collation center for the exercise, said the people had shown that they stood firmly behind their Governor, Dr.Kayode Fayemi against all odds by some politicians to foist their choice on the people.

According to him, the outcome of the election is also a manifestation of the will of the people to vote in free, fair, credible, and peaceful elections.

The People’s Democratic Party (PDP) governorship candidate in the election, Otunba Olabisi Kolawole, followed by thanking the people of the state for the peaceful manner the election was conducted. This is contained in the letter he signed and sent to the people from his base in Efon Alaaye via the press.

“We congratulate all those who supported us and thank them for believing in our desire to lift Ekiti State to an admirable pedestal. It is our prayer that Ekiti will grow from strength to strength, despite all odds” he says.

Also, the Director, Media, and Publicity of Biodun Abayomi Oyebanji (BAO) campaign organization, Rt. Hon. Taiwo Olatubosun, said the results of the election represent the fact that the Ekiti people desired to be governed by a truly democratic government, headed by those they genuinely voted for.

“We are happy that throughout this election, we did not see the military brutalizing the people or security officials supervising the snatching of ballot boxes and vandalization of votes.

“We also saw how the INEC officials maturely handled the complaints of various election centers that could have ordinarily created confusion.

“We can see that the result represents realistic figures; from one local government area to the other. No case of outlandish figures being reeled out. That is also a sign of some level of credibility in the process.

“The Ekiti election result is a victory for our country, her people, and democracy. We have shown that the glory of the country is more valuable to the citizens than the wish of a tiny power clique,” Olatubosun, emphasized

Mr. Usman Baba Alkali, the Inspector General of Police, in a statement, commended the electorate in Ekiti state for cooperating with the police and other security agencies. He says the cooperation yielded a dividend, manifesting in a peaceful exercise.

However, it must be noted that the exercise was conducted by humans, especially politicians and so it was characterized by some negative expressions often associated with such political activity devoid of serious crime.

For instance, the candidate of the Social Democracy Party (SDP), Mr. Segun Oni expressed dissatisfaction with the conduct and results of the election.

The candidate, who is also a one-time governor of the state, cited monetary inducement, harassment, and intimidation of his supporters saying that he would soon head to court.

According to media reports, Economic and Financial Crime Commission (EFCC) operatives were said to have caught some political agents as they allegedly engaged in vote-buying.

Much importantly political analysts, however, expressed reservation over the statistics that emerged at the end of the poll.

They believe that whereas the exercise has come and gone and adjudged credible, free, and fair, by the majority of people; such statistical revelation means much to be pondered on, especially now that Nigerians will soon elect their next leaders for the planned political dispensation next year.

Political enthusiasts think that statistics from the Ekiti guber poll are worrisome and needed to be studied by the politicians, particularly those of them warming to contest various elective offices and make use of the lesson to better future elections.

A Lokoja-based politician, Mal. Mohammed Abdullahi described the gap between 989,224 total registered voters for the exercise and the 363,448 voters accredited as worrisome.

“What happen, what must have gone wrong, is it that those charged with the responsibility of accrediting voters did not do their work effectively or is a sign of that serious political apathy, among the electorate,” he queried.

“What more, the 8,888 votes as voided, as shown in Ekiti state governorship poll is not good development of an election of such magnitude,” he added.

“When electorate does not get the desired dividends of democracy from those elected to serve them in government, there is the tendency for them not to come out for accreditation to get accredited for voting in an election.

“What more, there could also be political intimidation of the electorate, a development they see as a threat to their life and so they develop cool feet in coming out to exercise such civic responsibility.

“The fact that over 8,000 votes could be voided in the Ekiti guber poll shows that many electorates in that state have not got it right and need more enlightenment on voter education to check the trend.

“Money politics has come to stay in Nigerian politics due to striking poverty among the masses.

“Politicians usually cash in on the plight of the impoverished electorate to induce them with money and other incentives to win the election.

“This unfortunate circumstance may not be eradicated but can be curbed considerably when elected officers begin to show the desired commitment to the cause of bringing dividends of democracy to the people to alleviate poverty among the masses.

“When the masses begin to have a lease of life to poverty, they will think less of collecting money before casting their vote in an election,” Amupitan noted.

Mal. Musa Lawal, a civil servant also reminds the electorate that by selling their voting rights for the monetary gain they are not doing the nation good because it is one of the factors responsible for bad leadership.

He also stressed the need for INEC, National Orientation Agency (NOA), and relevant non-governmental organizations (NGOs) among others, throughout the country, to redouble efforts in their political education of the electorate for voters to know how to elect candidates of their choice.

“Indeed, the recent Ekiti State governorship election is an eye-opener, that there is hope for free, fair, and credible election in Nigeria.

“All it demands is an absolute dedication by all and sundry to the principle of electing leaders by the best practices, globally.

“By this, I mean that all of us must join hands together to make it happen by shunning electoral ills, such as ballot snatching, election rigging, political violence, and money politics,” Lawal advised.

Poverty as an issue in disability in Kogi