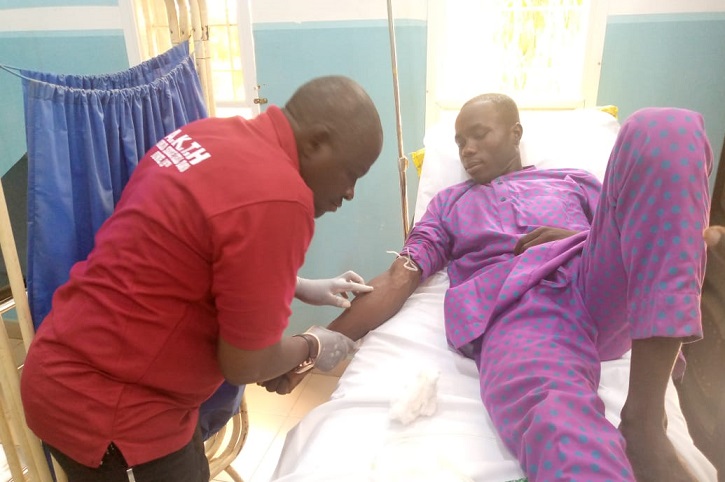 Dr. Aisha made the call on Monday at a one-day public sensitization event organized by AKTH to commemorate the 2022 World blood donor and Sickle cell Day at Sa’adatu Rimi College of Education, Kumbotso LGA.

She said the world blood donor day which is marked on the 14th of June every year and the World Sickle cell day on the 19th of June were merged because of the enormous importance of each day.

Dr. Aisha disclosed that this year’s event is targeted at the youth but subsequent outreach will be taken to those at rural levels to educate them about the risk and challenges of sickle cell and the need for blood donation.

She explained that if an individual with AS marries someone with the same genotype there is a 25 percent chance of such a couple giving birth to a child with sickle cell disease.

She then thanked the management of Sa’adatu Rimi College of Education for their support and advice to over three hundred youths present at the event to go for pre-marital tests before any commitment.

Blood transfusions are the most common treatment for SCD.

In other cases, a blood transfusion can save the life of a person with sickle cell. It can also help lower the risk of having strokes.

There are many options for donating blood, one of which is to book an appointment with the Haemotology and Blood Transfusion Department at AKTH or any hospital near you.

He stated that the reason why both departments decided to take the campaign beyond the hospital is to create awareness and enlighten members of the public, especially youth to cultivate the habit of donating blood and shun the misconception people have about donors.

The CMD added that just like arms–giving, people should voluntarily donate blood, as it is not just beneficial to the receiver but also to the donor; those who donate blood have a lower risk of suffering from deadly disease.

According to him, AKTH is open and accessible anytime to donors.

He urged intending couples to go for premarital tests, counseling, and health talks to avoid making mistakes that can affect their children.

The Coordinator of E-Health Africa, Mohammed Bello said to spread awareness of sickle cell disease, E-Health Africa collaborated with the Department of Hematology and blood transfusion, AKTH, and supported the departments with 67 sickle cell scan skits and a donation of a hundred thousand Naira.

“The Sickle scan is a multiplexed, qualitative point of care immunoassay that aids the rapid diagnosis of sickle cell disorders and gives the result instantly,” he said.

One of the participants, the Chairman of the academic board of the medical student association, Bayero University Kano, Abubakar Keller advised the youth to always give back to the community.

He said those who always complain of not getting an accurate genotype test result should go for High-Performance Liquid Chromatography (HPLC); it is more efficient.

The event had in attendance top officials from AKTH and staff as well as students from Sa’adatu Rimi College of Education, Kano.

Belgium hands over casket with last remains of Patrice Lumumba