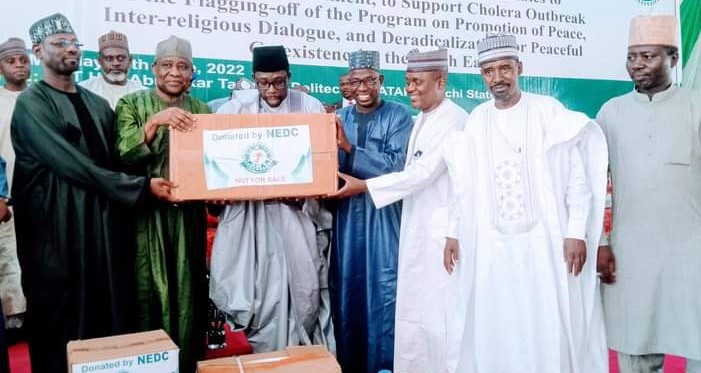 This was contained in a statement, Monday, by the Information Officer, Ibrahim Sani.

According to the statement, the Director made the disclosure while speaking at the graduation ceremony of batch C NEDC ICT programs and handing over drugs and medical consumables.

He said the flagging off the promotion of peace, inter-religious dialogue, and de-radicalization for peaceful coexistence in the North East was held at the Abubakar Tatari Ali Polytechnic Bauchi.

According to the statement, the Director-General and Chief Executive Officer North East Development Commission, Mohammed Goni Alkali explained that the commission will continue to collaborate with Bauchi State Government in providing more and needed interventions so as to improve well-being, peace, and prosperity for the betterment of the people.

In his remark, Governor Bala Abdulkadir Mohammed said the NEDC has been a strategic Federal Government establishment with multiple impacts on the people and noted that the donation of drugs and medical consumables has come at a better time when the state is working assiduously to respond to outbreaks.

Bala Mohammed who was represented by the Chief of Staff Government House, Dr Aminu Hassan Gamawa recalled that NEDC in collaboration with the State took part in the development of the North East Development Plan which is another important milestone.

He also commended NEDC for the training of Youth in the ICT and technological skills, in order to provide them with jobs and at the same time meet the challenges of the contemporary digital age.

The Executive Chairman SPHCDA Dr. Rilwanu Mohammed appreciated the commission for its numerous supports, especially in partnering with the state which culminated in the provision of the first Molecular Laboratory in Bauchi State.