Rage on the Red Sea 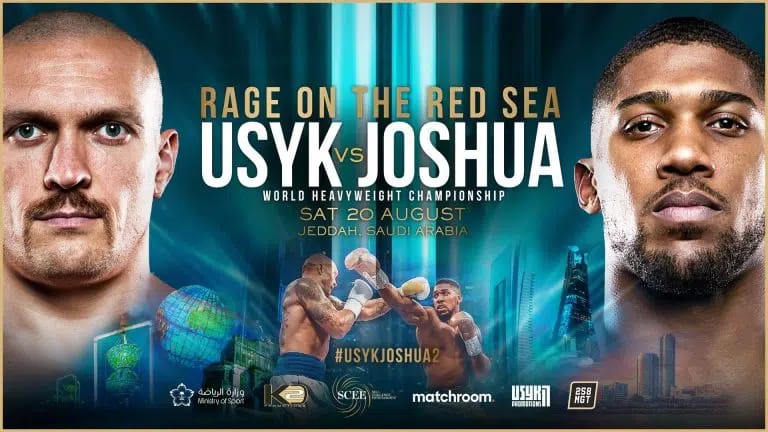 Anthony Joshua will be having his rematch with IBF/WBA/WBO heavyweight champion Oleksandr Usyk on August 20th on DAZN PPV in Jeddah, Saudi Arabia.

This is one of the biggest Heavyweight rematches in the history of the sport, Usyk vs. Joshua 2, billed ‘Rage on the Red Sea’, under the patronage of HRH Mohammad bin Salman and in line with the Kingdom’s Vision 2030 ambitions.

The eyes of the sporting world will be on the Kingdom of Saudi Arabia once more as AJ aims to exact revenge over Usyk and take his place back at the top of the Heavyweight division.

It was Usyk who choose that the second fight should be in a location where it can bring in the most revenue because you never know what might happen when it comes to the scoring of the rematch.

AJ lost his three titles to Usyk last September in a 12-round unanimous decision at Tottenham Hotspurs Stadium in North London, England.

This is the match that boxing fans have been waiting for since the two fought last September in London, a fight that Usyk (19-0, 13 KOs) won by a surprising upset 12-round unanimous decision to rip the IBF, WBA & WBO heavyweight belts from the superstar AJ.

If Joshua can beat Usyk, WBC champion Tyson Fury is expected to come out by his retirement to face him for the undisputed championship.

Joshua. vs. Usyk II will be shown on DAZN PPV, which won’t make boxing fans happy at having to pay to see it. They’ll pay because it’s going to be a huge fight with massive ramifications.