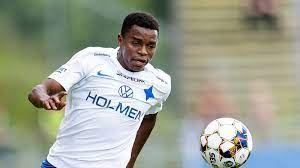 Having impressed at the PlatinumCars Arena, the 20-year-old has been snapped up by the Purple and White

Anderlecht have announced the signing of Ishaq Abdulrazak from Swedish top-flight side IFK Norrkoping.

After passing his medical with the Belgian side, the 20-year-old was handed a four-year contract that will keep him at the Lotto Park in Brussels until 2026.
“The first summer transfer is here. RSC Anderlecht have reached an agreement with Swedish club Norrkoping concerning the definitive transfer of Ishaq Abdulrazak. He signs a contract for four seasons at our club,” the club wrote in a statement.
“Ishaq is a 20-year-old Nigerian who played for Norrkoping since 2020 and has been a stronghold of the team ever since.

“He’s comfortable as a wingback but can just as well play in various positions in midfield.”

Born in Kaduna State in Nigeria, Abdulrazak began his football career at Unity Academy, before signing his first professional contract with the Swedish outfit in 2020.

In his three seasons with the Comrades, he made 55 league appearances with just two goals to show for his effort.

According to the player, the move to Belgium is a massive step while expressing his desire to prove his worth.

“This is a big step up for me, one that I’m very proud of. I want to prove my worth to the team as soon as possible and I am looking forward to meeting my teammates and the fans,” he was quoted by the Anderlecht website.

The club’s Chief Executive Officer Peter Verbeke is pleased to have the African in his fold and he talked about the qualities that made the 34-time Belgian club champions secure Abdulrazak’s services.

“We have been following Ishaq for quite a while and we are very happy that we can add him to the group now,” he said.

“Ishaq has a lot of physical qualities; he is fast, agile, has volume and plays with aggressiveness.
“On the other hand, he also has a lot of technical abilities, which makes him a versatile player.”

With this move, Abdulrazak becomes the third African in Felice Mazzu’s squad. Others are Majeed Ashimeru (Ghana) and Christian Kouame (Cote d’Ivoire).

Anderlecht finished third in the 2021-22 campaign and that earned them a place in next season’s Europa Conference League third qualifying round.
(Goal)