Was the Nigerian Civil War avoidable? 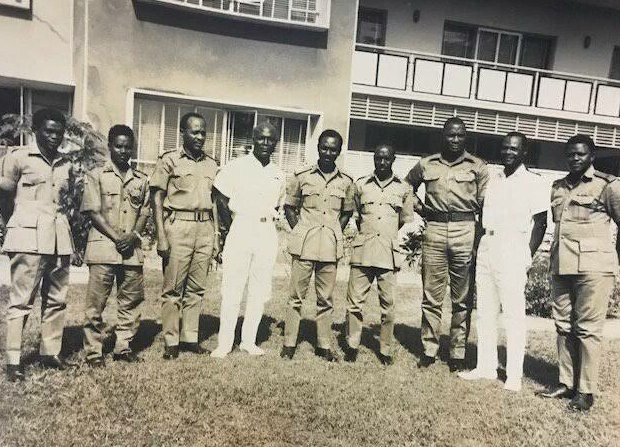 Every picture tells a story. This one tells how a group of Nigerian junior and middle-level officers became service chiefs, senior field commanders, principal staff officers, and national political leaders without any cognate exposure, requisite training or adequate preparation.

While I stake this claim with all due respect there is no denying the quantum of collateral damage due to the errors of omission, indeed commission by our esteemed elders has been so unimaginable. More worrisome is the aftershock that is still reverberating in the Nigerian polity to date.

I have just finished reading Frederick Forsyth’s 368-page memoir entitled, The Outsider: My Life in Intrigue (2015).

It is not a work of fiction, nor faction like The Day of the Jackal, The Odessa File nor The Devil’s Alternative but actually a true-life account of the accomplished author from childhood to his present-day endeavors.

Of particular interest to me was how in his own words he described his arrival to Nigeria in 1967 as a BBC correspondent but ending up as a freelance journalist in the short-lived Biafra enclave before dramatically escaping to Libreville just before Christmas Eve, 1969 on the same starry night Dim Ojukwu went on exile to Abidjan in an earlier flight from the Uli airstrip.

While the author openly confessed his role as a British spy spooking on both sides of the conflict during the ensuing period, he was very economical with details.

As I put the book down three questions bothered me: Was the Nigerian Civil War deliberately contrived? If so, to what end? What actual role did Mr. Forysth play as an agent provocateur in the conflict?

I am not unaware of the national implication in the dictum, “A captain should endeavor with every art to divide the forces of the enemy, either by making him suspicious of his men in whom he trusted or by giving him cause that he needs to separate his forces and because of this becomes weaker.”

That is why the foregoing questions including the title of this post are worrisome particularly against the background of the classical definition of Neocolonialism and the inherent nature of the, divide et impera (divide and rule) strategy that;

“Breaks up existing power structures, and especially prevents smaller power groups from linking up, causing rivalries and tormenting discord among the people to prevent a rebellion against the elites or the people implementing the strategy.”

Many historians and commentators have narrowed down the main causes of the Nigerian Civil War to the fallout January 15, 1966 putsch and the failure of the Aburi talks of January 4-7, 1967. While I do not entirely discount these assertions, I do not totally accept them in isolation.

Rather, I align myself more with AHM Kirk-Greene’s gunpowder metaphor, “The explosion of 15 January can be traced back along the powder trail to the fuse lit at the time of the Western Region elections of October, 1965.

However, further back that fuse may be said to have been laid at the very birth of the Nigerian entity. Thereafter, it was no longer a question of whether but simply a matter when the detonation would occur.”

Truth is Nigeria’s, “North and the South — entered the independence era with suspicion and mistrust of one another. Nigeria was divided by, and under the domination of, two major religions — Islam and Christianity — each in the constant struggle for power with the other. Lurking behind this struggle were regional and ethnic interests.”

Anyway, back to the picture.

At the outbreak of the Nigerian Civil War in 1967 none of these officers had attained more than 10 years of military experience except Gowon with 11.

They were all too militarily inexperienced and hardly knowledgeable in governance. Despite being British trained, they never really understood the real dynamics of international subterfuge that provided the enabling background of the Nigerian Civil War.

The intransigence of the ruling elite from the erstwhile Eastern Region also took its toll. There was collective naiveté on all sides.

And as Nigeria’s immediate past colonial master, Britain never robustly sued for peace during the turbulent period of 1966. The British never participated in the Aburi or any international peace talks nor engage in any shuttle diplomacy to prevent the breakout of war. They would instead, quite enthusiastically though, supply enough weaponry that kept the conflict raging for 30 atrocious months.

Fast forward to the present-day widespread insecurity in Nigeria;