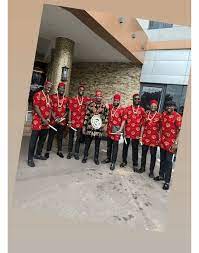 The players were all smiles and with most from South-East Nigeria vibing to the songs and atmosphere.
(Pulse)