Knighthood in the Catholic Church – A Tested Faith: The Perception, Exposition 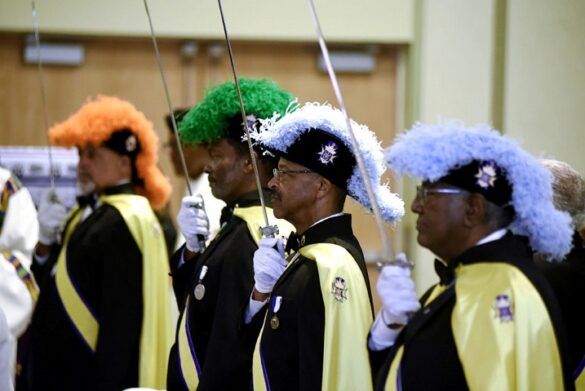 In the words of His Lordship Most Rev. Dr. Anthony Nwedo, the late Bishop of Umuahia Diocese, “the Catholic Knighthood as it is today has its origin in the Feudal System of Christian Europe and draws its inspiration from the gallantry, heroism, and noble service of Christian Knights especially during the period of the crusades.”

The Catholic Knighthood is therefore a sacred institution on which the church lay great emphasis. The concept of faith; prayer; justice; and service to humanity, the church, community, country, and by extension the entire world is some of the cherished ideals of the Knighthood. Others include the protection and support of the weak, vulnerable, and less privileged.

The Knights carry out these activities through courage, honour, humility, fidelity, and selflessness in the use of their talent, time, and treasure.

As selfless as their activities have been, the Catholic Knighthood is not spared of “public attention” as they have come under a series of scrutiny, critical examination, and commentary through private and public discourse, as well as their impact on the religious life of the laity. Some have argued in support of the Knighthood while others think otherwise.

This discourse and exposition is therefore an attempt to acquaint the Catholic lay faithful and the general public with some of the activities of the Catholic Knighthood. This effort is coming on the backdrop of the perception, views, opinions, issues, and questions which have likely been on the minds of the public.

Who is a Knight?

The Oxford Advanced Learners Dictionary defines a Knight as a man of noble disposition with a rank of honour conferred on him in recognition of his character, qualities, and meritorious services, with a duty to defend his country, and having the title, “Sir” before his name.

Who is a Catholic Knight?

A Catholic Knight is a Catholic Lay Apostolate of high Christian values in character and conducts through prayers, honesty, charity, loyalty, humility, service, fidelity, and bravery, and he is thus knighted for the purpose of defending the catholic faith.

He is one who strives and makes efforts to be a better person today than he was, and through his actions, words, and deeds draw men to God and the faith.

Legitimization of the Catholic Knighthood

The Knighthood is a pious association/society like any other like the Sacred Heart, Legion of Mary, Charismatic, and hence the church allows and permits “Christ’s faithful to freely establish such groups which serve charitable pious purposes and fosters Christian unity and vocation, and may hold meetings to pursue these purposes for the common good” – Canon 215.

In carrying out these actions to support and promote apostolic action, Canon 216 states that they must do this with the consent of competent ecclesiastical authority, who as enshrined in Canon 223 section 2 must supervise and regulate the activities of such association.

The church, therefore, encourages both the clergy and the laity to join the Knighthood which has been established, praised, and recommended to Forster evangelization, and works of charity as stipulated in Canon 298 sections 1&2.

In line with this philosophy, and in strict compliance with the statutes as contained in the code of Canon law, the church supervises the formation, constitution, code of conduct, purpose and objectives, administrative setup, and condition of membership of the Knights orders.

This expression is contained in Canon 304 sections 1 & 2.

In addition, the local Bishop is the Patron of every established Knights’s order in his Diocese, and he in turn appoints one of his clergies as the chaplain in strict compliance with Canon 305 sections 1 & 2.

The Order of the Knights of St Mulumba was established on the 14th of June 1953 by Rev. Fr. Anselm Abraham Isidahome  Ojefua, later became a monk from Illah Monastery in the old Mid-Western Nigeria.

Why the Name Mulumba

(1) The choice of the name of Mulumba was in recognition of the sacrifice and martyrdom of the Martyrs of Uganda.

The Martyrs of Uganda are part of a group of 23 Anglicans and 22 Catholics who were brutally executed in Uganda between 1885 and 1887 for converting to, and refusal to renounce Christianity.

For this rare show of martyrdom, the 22 Catholics among them were beatified in 1920 by Pope Benedict XV, and later Canonized Saints by Pope Paul VI on 18 October 1964.

The name Mulumba is the surname of one of the 22 Martyrs – Matthias Kalemba Mulumba.

(2) Another reason leading to the choice of the name Mulumba is that Matthias Kalemba Mulumba was:

(a) Earlier a Worshiper of the African Traditional Religion.

(b) He converted to Islam religion.

(3) Matthias Kalemba Mulumba was the oldest (50 years) of the 22 Martyrs of Uganda.

(4) He exhibited exemplary leadership and courage to the younger ones which they emulated.

(5) There was the need to have an African indigenous Saint name for the Knights group founded in Africa by Africans.

Perception of the Knighthood as a Secret Society Debunked

The Catholic Knighthood is not a secret society because of the following reasons:

(1) The Knighthood is a lay Apostolate Marian Society like other Marian associations established and formed in the church for the spiritual growth of the lay faithful.

(2) The Knights are under the supervision of each of the Local Bishop in compliance and as enshrined in the code of Canon law 1374, and as expressed in Vatican II who:

(a) approves their formation and establishment.

(b) scrutinizes their constitution and code of conduct.

(d) regulates their recruitment and membership.

(e) appointment of a chaplain from among his clergy to oversee the Knighthood activities in his domain.

(f) Membership is open where intending members’ names are announced in church during Mass on three consecutive Sundays (calling of banns of membership).

(g) The meetings and activities of the Knights begin with Mass and the chaplain stays through the proceedings to the end.

(h) Many Catholic Priests are members of the Knights.

The Catholic Church, therefore, calls on the “lay members of Christ’s faithful to hold in high esteem the associations/societies constituted and established by the church for the spiritual and temporal growth” – Vatican II section 59.

How to become a Knight

The Knights identify and invite men who are, but are not limited to the following:

(i) Literate lay Apostolate Catholics. (ii) Married. (iii) Practicing Catholic. (iv) Active and productive in church. (v) Known in the community with good character. (vi) Prepared to use his talent, time, and treasure in the service of God and humanity.

When eventually identified, both husband and wife are screened. This is also done through the mandatory calling of banns of intending membership of the candidate for three consecutive Sundays announced in church during Mass.

Any objections are routed through the parish priest.

If you wish to become a Knight, be active and be of service to your Church and your community, live a good Christian life, and be a practicing catholic. You would then be spotted and may be invited to join.

Very explicitly explained. Thank you so much lady prof Elizabeth Kembe for sharing.