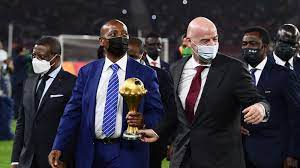 After a hiatus, the ceremony has returned to recognize exceptional individual talents in African football

The Caf Awards return this year after being cancelled in 2020 and 2021 due to the Covid-19 pandemic that crippled football-related activities.

During the award ceremony, individual honors in African football would be bestowed upon deserving individuals for their contributions to the beautiful game from September 2021 until June 2022.

GOAL has what you need to know about when the ceremony this year, the venue and more.
The 2021 ceremony will take place on July 21, 2022, in Morocco.

In the coming days, Caf, as well as the Royal Moroccan Football Federation, are expected to announce the exact venue where the prestigious event will take place.

Interestingly, the awards will happen two days before the final of the 2022 Women’s Africa Cup of Nations slated for the Prince Moulay Abdellah Stadium in Rabat.
How to watch Caf Awards 2022
The event will be available to stream live for free on Caf’s YouTube channel and website.

It will also be available to watch on Super Sports and several top TV stations across Africa.

Following the introduction of the Caf Women’s Champions League, a new category – Interclubs Women Player of the Year – has been introduced.
How will Caf Awards 2022 winners be decided?
According to Caf, the winners will be decided by votes from captains and coaches of the Member Associations, selected journalists, Caf Technical Study Group and Caf legends.