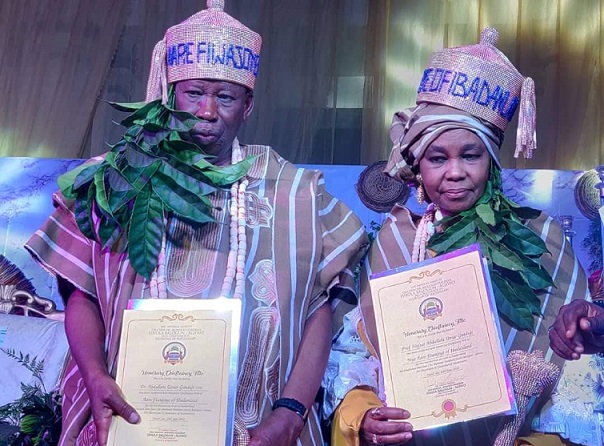 Tinubu commended the development and assured that “This will go a long way in further cementing the country. It will definitely promote peace and tranquility among Nigerians.”

According to the statement, the Olubadan praised that, “Governor Abdullahi Umar Ganduje is a detribalized Nigerian, who believes in national integration and harmonious relationship among all parts of Nigeria.”

“Let me sum up it up with two paragraphs from the letter of recommendation by Oba Yoruba Kano thus: Bestowing a befitting Chieftaincy title on the hardworking and amiable governor with his wife will be a reward for a man who has been compassionate to us as a people and who believes that any Nigerian can stay and work in any part of the country without molestation or denial of basic things of life,” he revealed.

He further appreciated the people-oriented posture of the Kano state government, adding, “Your Excellency all these Chieftaincy titles are well deserving. We are awarding these titles to the right people.”

In his remarks, Governor Ganduje referred that, there has been a long existing relationship between Kano and Oyo, “Particularly during the reign of the late Emir Ado Bayero with the late Alaafin of Oyo.”

Explaining further, “You can also remember that just in the last few years I gave the hands of my daughter in marriage, to the family of the late governor of Oyo state Isiaka Abiola Adeyemi Ajimobi.”

The development, according to him, would promote cordial relationship between Hausa/Fulani and Yoruba race, “…and among all parts of the country.”

Many Commissioners, top government functionaries, party leaders and elders were on the governor’s entourage who attended the conferment ceremony.

All Emirs from Kano state were in attendance, under the leadership of the Emir of Kano, Alhaji Aminu Ado Bayero, among other dignitaries.

Biden is ‘fine’ after falling off his bike in Delaware