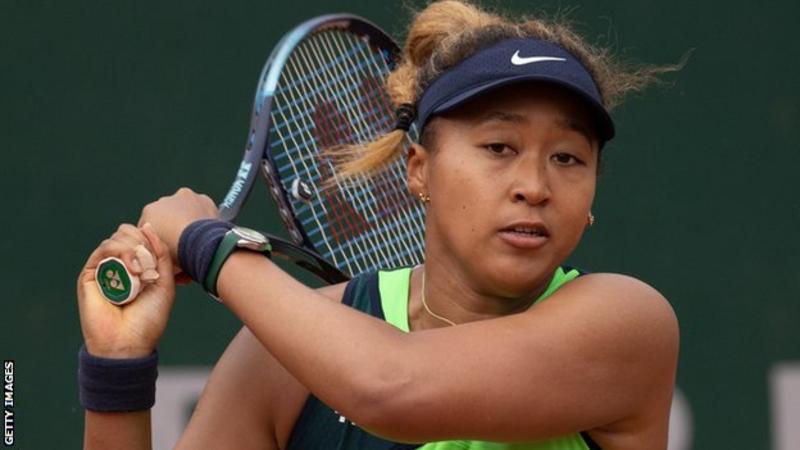 Japan’s Osaka has not played since the French Open and recently posted a video of herself doing rehab on a treadmill.

The 24-year-old previously said she was “unsure” if she would play Wimbledon because of its lack of ranking points.

The ATP and WTA stripped the points from Wimbledon after the tournament banned Russian and Belarusian players over Russia’s invasion of Ukraine.

Osaka’s name appeared on the singles entry list for Wimbledon when it was released last week, but she has not appeared in any of the grass-court events.

Posting on her Instagram account, Osaka said she was “trying to find the positives in a negative situation”.

“I feel like life keeps dealing cards and you’re never going to be used to them but its how you adapt to uncomfortable situations that really says stuff about your character,” she said.

“Every day before I go to sleep I think of all the people I love and how grateful I am to have them in my life. I honestly just wish the best for them and I hope that my existence brings them as much joy as they do me.”

The world number 43 has slipped down the rankings after taking several breaks from the sport last year to protect her mental health.

Former finalist Eugenie Bouchard also withdrew from the tournament on Saturday because of the lack of ranking points on offer.

The Canadian former world number five dropped to 253 in the WTA standings in January after a lengthy absence following shoulder surgery, but was able to enter the Wimbledon main draw under her protected ranking.

Players only receive a limited number of protected ranking entries to use at tournaments.

“As much as I love Wimbledon and skipping it makes me sad, using a protected ranking [PR] entry at a tournament with no ranking points doesn’t make sense,” said the 28-year-old, who lost in the 2014 singles final to Petra Kvitova.

“I must choose wisely and use my PR entries at tournaments that will help me get back to where I want to be.”

Bouchard said she would use her two Grand Slam protected ranking entries at the US Open and Australian Open.
(BBC)