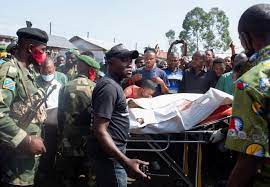 Tensions remain high in the border between the DRC and Rwanda after the death of a Congolese soldier following an exchange of fire.

According to witnesses, a Congolese soldier, who was at the border, crossed the neutral zone that separates the two border posts, while firing in the direction of Rwanda.

A Rwandan soldier returned fire, killing the Congolese soldier on the spot.

In a statement, Rwanda confirmed that two of its soldiers were wounded in the exchange, as well as an unspecified number of civilians present at the border.

Kigali claims that the Rwandan officer fired in self-defense and that the Congolese soldier was on Rwandan territory.

The Congolese authorities are yet to react.

The incident comes at a time when relations between the two countries have been particularly tense since the resurgence of the M23 rebel movement and the intensification of fighting in the region in recent weeks.
(Africanews)