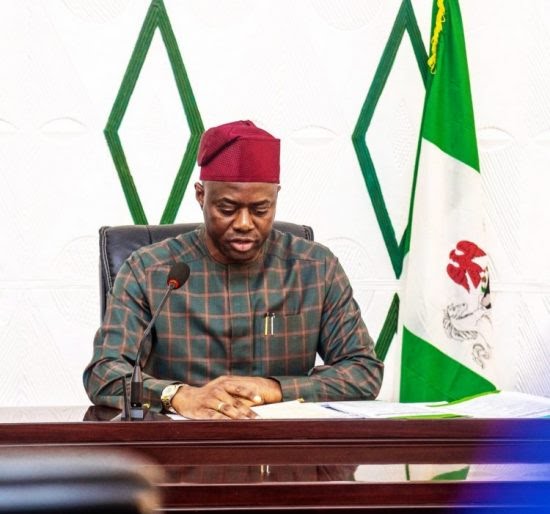 The Oyo State Government on Friday presented Nine thousand, two hundred and twenty-seven letters of promotion to primary school Teachers in Grade level 13-15 in the State.

This was revealed today by the Executive Chairman, Oyo State Universal Basic Education Board, Dr. Nureni Aderemi Adeniran during the symbolic presentation of 2017-2020 letters to Seven Thousand, Four-Hundred, and Sixty Teachers.

He said the pending promotion letters are in fulfillment of Governor Seyi Makinde’s promises to teachers in the State.

Dr. Adeniran noted that the category of teachers who received their letters of promotion was placed on a six-year waiting period by the previous administrations, adding that this policy had affected the morale of teachers in Public Primary Schools because their counterparts in the Secondary Schools were not affected by the policy.

“I am pleased to be here this morning at the official presentation of Promotion letters to our teachers from grade levels 13 to 15. You are all aware that a similar program was held in October 2021 for teachers and non-teaching staff”, he said.

Adeniran appreciated the Executive Governor of the State, Engineer Seyi Makinde for his love for teachers, which was demonstrated by the approval granted, that six years waiting period be reverted with immediate effect.

“This by implication means that all teachers affected are going to enjoy their promotions with a month’s arrears and this takes financial effect from the month of June 2022”, he said.

Dr. Adeniran added that teachers that have retired from service, in the course of processing the approval for the lifting of the six-year waiting period will also enjoy the promotions, simply by applying for the re-computation of their gratuity and pension in line with the Pension Act.

Adeniran said, “The present administration has positively impacted the lives of both public and Civil Servants because of its people-oriented policies. In view of this, I want to admonish all our teachers to ensure that, to whom much is given, much is expected”.

He, therefore, called for the support of teachers, adding that the State Government, under Governor Seyi Makinde’s leadership has left no stone unturned to better a lot of teachers in the State.

“This administration will request your support to enjoy continuity of prompt payment of salaries and promotion as and when due, as well as, a conducive working milieu”, he said.

Dr. Nureni Aderemi Adeniran acknowledged the support of the Nigerian Union of Teachers, (NUT) and Association of Primary School Head-teachers of Nigeria, (AOPSHON) Oyo State Branch to the success of this exercise.

“In all, a total number of Nine Thousand, Two Hundred and Twenty-seven (9,227) letters of promotion were produced for teachers on GL. 13-15”, he said.

“This has taken care of those that will benefit from two promotions. Once again, I wish to admonish all teachers to be patient and appreciative of the present administration’s various kind gestures, geared towards ameliorating their sufferings, improving their career progression, and their well-being, all of which are unprecedented. These gestures can only be reciprocated by being more committed to their duties at all times, with a view to ensuring improved learning outcomes in our schools”, Adeniran added.

Speaking earlier, the NUT Chairman, Com. Raji Oladimeji assured the State Government that the gesture of the state government would never be forgotten, adding that this would further encourage teachers in Primary schools to deliver good, qualitative, and efficient education to the pupils across the state.

The event was attended by Principal officers of NUT, AOPSHON, Directors at OYOSUBEB, and Teachers, among others.

Sadio Mane will join Bayern Munich in a deal worth £35m