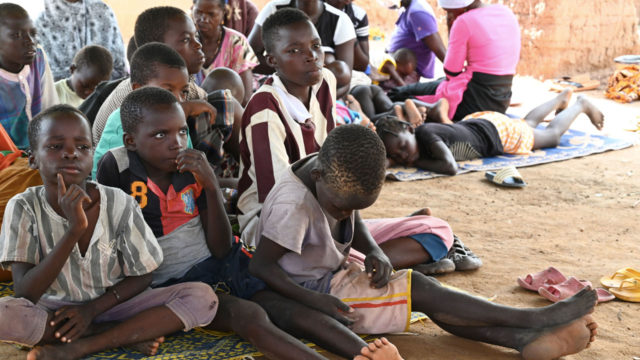 The Deputy Director MacArthur Foundation, Mr. Dayo Olaide has indicated that there is an astronomical increase in the number of out-of-school children from 10.5 million in 1999 to 18 million in 2022 despite the N100 trillion budget by the Federal Government within the same period.

Olaide spoke on Thursday in Abuja at a policy dialogue on situating Constituency Projects in the 2023 Electioneering Campaigns organized by OrderPaper in partnership with BudgIT and MacArthur Foundation.

He expressed disappointment that lawmakers are rather concerned about commendations that they passed the budget without monitoring its implementation and real-time impact on the citizenry.

“When the National Assembly passes the Appropriation, it is a law but the effect and impact of that appropriation will never be felt by the ordinary Nigerians unless it is implemented and there are clear indicators that are human-centered to show the extent to which they are actually impacting us.

“But within that same period, out-of-school children rose from 10.5million to 18million. So ask the question, where are those over N100 trillion gone to.”

“Otherwise, we will be patting ourselves on the back and say two years ago, the budget was passed March the following year, but this year budget even in December before the end of the current year.

“It is success and progress, yes, we should commend the National Assembly for doing that but Nigerians are not concerned about those passages.

“Nigerians when they wake up every morning, they are asking themselves, what does this budget mean for me as a person.”

“The member of the House of Representatives that spoke before me indicated that in the last couple of years there has been improvement and progress in legislative activities.

“In fact, for many of us, we applauded the National Assembly when the House of Representatives and the Senate commenced the process of developing for themselves a legislative agenda because we all felt this was a turning point and provided an opportunity for us to engage them and to hold them to account.

“I think in terms of making laws, many of us will say, yes indeed, whichever sector or part of the economy you look at there is progress.

“For example, the sector that I am very much interested in which is governance, there is progress. You can talk about the Public Procurement Law which was never there. You can talk about the anti-corruption Act and the Fiscal Responsibility Act, the Nigerian Extractive Transparency Initiative Act, and several important legislations that are in place.

“But the significance of any law is not in the paper that has been signed. It is in the impact that it is able to make in the lives of the ordinary Nigerians and I think that is why the biggest deficit is.

He said looking at the education or health sectors, it is difficult to argue that there has been progress even though there is progress in the number of laws, whether federal or state in all the areas

BudgIT representative, Adewale Adejola, who stood in for the Country Director Mr. Gabriel Okiewu in his remarks said despite 469 federal lawmakers, 36 Governors, House of Assembly members, and local government Chairmen and Councillors, it is so disheartening that people’s needs are not being captured in the communities. “Sometimes the legislators don’t even know the situation of the people they are representing. That is why needs assessment is important.

“With our Tracker department, we monitor constituency projects in 32 states and the FCT. So we have an understanding of what is actually happening across the country.

“We also see that empowerment projects take more than 60 percent of the N100billion allocation for constituency projects every year.

“Of the amount, the Principal Officers like the Senate President, Speaker of the House of Representatives, Senate Leader and his counterpart in the House, etc, take the largest share.

“Like the Speaker, Honourable Femi Gbajabiamila his share of projects is more than that of lawmakers from two states combined. I stay in Lagos and if I measure the developments in Federal constituency 1 that he represents, the funds being allocated to the zonal intervention project cannot be compared to the projects on the ground. So, people don’t know.”

“The biggest challenge we have today is not corruption even though I do say sometimes, is corruption, it is the fast-disappearing confidence and trust of citizens in anything that represents Government and democracy now.”

“I think Constituency projects present the unique opportunity for the National Assembly to build and restore that confidence so that when we say we speak on behalf and we appropriate funds on your behalf, we are actually doing that.

“We are ensuring that allocations actually get to the people and we can tract them. We need to restore citizens’ confidence in Government and democracy and in everything and anyone that represents Government because ultimately citizens will protect democracy and protect those who are driving it.”

“The National Assembly has an immediate responsibility to stop that descent and begin to restore confidence. The easiest way is to begin to respond to the people by doing projects that matters to them, appropriating resources to areas that will touch them.”

Executive Director, OrderPaper Advocacy Initiative, Oke Epia, said, as lawmakers have come to the season they need Nigerians to remain in the chambers, there was need to evaluate almost four years they have done.

“That is the mandate we have brought upon ourselves at OrderPaper in the last couple of months to do some form of appraisal, it may not be very exhaustive, around the core functions of the legislature – Lawmaking, the performance of oversight, and representation.