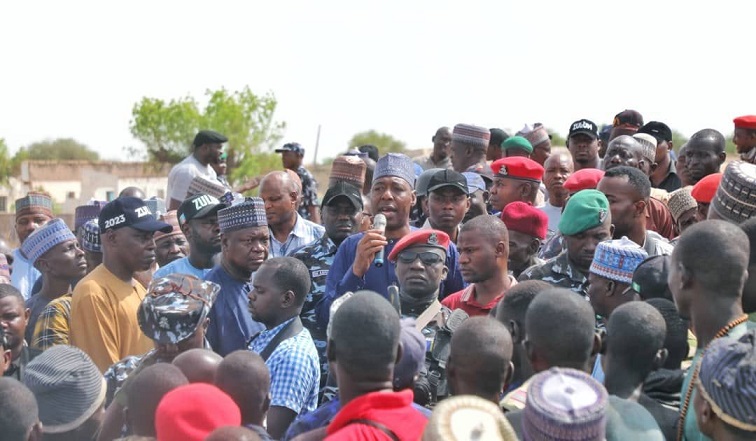 He traveled by road early morning from Maiduguri and returned at night.

Zulum, during the visit, approved the construction of 500 resettlement houses to accommodate returnees.

Logumani residents were displaced as a result of the activities of Boko Haram insurgents for over seven years.

The governor also announced support for residents of Logumani to enable them to rebuild their homes, destroyed by insurgents.

Also, during the visit, the governor interacted with residents of Logumani, who are taking refuge in Dikwa town, and discussed modalities of returning them back to their ancestral homes.

Before Sunday’s trip, Zulum undertook a similar one to Kirawa town in Gwoza Local Government Area on Saturday.

In Kirawa, the governor had supervised the resettlement of over 2,500 households.

Before Kirawa, Zulum had paid similar visits to dozens of communities in northern, central, and the southern parts of Borno State.

The governor’s latest trip to Logumani comprised of the member representing Ngala at the state assembly, Mustapha Dalatu, and that of Dikwa, Zakariya Dikwa.

It also included former commissioner of Agriculture and APC’s candidate for a house representatives’ seat, Engr. Bukar Talba and heads of relevant establishments of government involved with construction and reconstruction, provision of water, livelihoods and general human empowerment.

Zulum returned after nearly 12 hours of the humanitarian trip to Logumani.

2023 and the race and region of religion