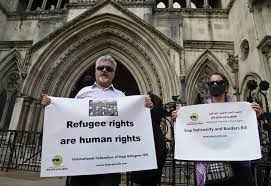 The UK’s controversial plan to deport migrants to Rwanda goes ahead despite an emergency bid by NGOs.
A British judge rejected on Friday to ground a flight due to take 30 asylum-seekers to Rwanda next week.
This deportation flight was arranged after an agreement with the east African country’s ruling politicians was made last April.

British charities including Care4Calais and Detention Action plan to appeal. “This is a brutal policy.
We’ve spoken to more than a hundred migrants who have been given these notices that say they are going to be forcibly removed from the country.
These are people who have come in, who are from war-torn countries, who are already traumatized, it simply adds to the agony and causes more trauma.
It is an absolute scandal. “, reacted James Nichol, Lawyer and trustee for charity Care4Calais in London on June 10.

Despite criticism accommodations like Hope Hostel, in Kigali claim they are ready to host migrants comfortably, which doesn’t comfort human rights activists.

If nothing stops it, the first flight bringing migrants to Kigali will take off next Tuesday.
(Africanews)