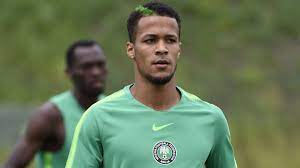 William Troost-Ekong will be unavailable for action when Nigeria face Sao Tome and Principe in Monday’s 2023 Africa Cup of Nations qualifier.

The stand-in Super Eagles captain suffered a muscle injury against Sierra Leone and has not been able to recover in time for the trip to Morocco.

In the 2-1 comeback victory over the Leone Stars, the Watford player could only feature for 82 minutes before making way for Spain-based Kenneth Omeruo.
A GOAL source close to the Super Eagles hinted that the former Udinese man has returned to England for further tests.

Troost-Ekong has been a regular face in the three-time African kings’ squad and his injury setback now means coach Jose Peseiro will be handed a starter’s role against the Central Africans in Morocco.

Meanwhile, the Super Eagles are expected in the North African country on Sunday morning having departed the country on Saturday evening.

Sao Tome and Principe would be aiming to return to winning ways after suffering a disappointing 5-1 defeat to Guinea Bissau in their first Group A match.

Meanwhile, former Nigeria international Henry Nwosu has warned Peseiro and his squad not to underestimate Adriano Eusebio’s side.

“Commencing the 2023 Afcon qualifiers with a victory against Sierra Leone is a good one by the Super Eagles,” he told Completesports.
“However, their next attention should focus on Sao Tome, going there and picking maximum points.

“The players must not underestimate them because every country in Africa is now playing good football.

“They should maintain the same winning spirit they displayed against Sierra Leone because the three points are all that matters.”
(Goal)

Thousands rally in US against gun violence