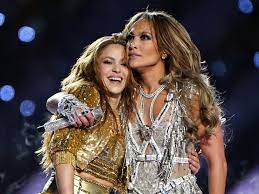 Jennifer Lopez has described her 2020 Super Bowl performance with fellow Latina star Shakira as the ‘worst idea in the world.’
The singer/actress made the revelation in one of the scenes of her new documentary ‘Halftime’. In a report by Entertainment Weekly, Lopez complained about barely getting enough time to sing through her selected list of songs.

“We have six fucking minutes,” Lopez told her music director Kim Burse during her half of the Super Bowl performance.

Another clip from the documentary shows Lopez speaking to Shakira about their time slots. “If it was going to be a double headliner, they should have given us 20 minutes,” she shared.
Lopez’s longtime manager Benny Medina also shared her sentiments in the documentary.

“Typically, you have one headliner at a Super Bowl,” Medina said, per Entertainment Weekly. “That headliner constructs a show, and, should they choose to have other guests, that’s their choice. It was an insult to say you needed two Latinas to do the job that one artist historically has done.”