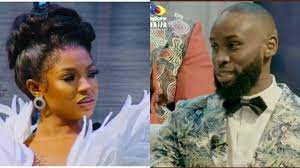 In the latest episode of the BBNaija Reunion show, controversies trail the stay of Emmanuel in the Big Brothers’ house after he was confronted with different accusations.

The fashion model was accused of flirting with several ladies in the house, including Angel, JMK and Saskay, which has caused a fracture in his relationship with Liquorose.

When asked by Ebuka if these accusations were true, the 24-year-old said he was being friendly with fellow housemates and was only returning the energy they gave him.

“I’m in the house filled with other people, you don’t expect me to just give cold shoulders all the time and pretend they are not there. If you’re nice to me, I’m nice to them, and all these situations were nothing serious,” he stated.

Emmanuel continued, “If I have something and feel something for you, I will push it, but I did not feel anything for them.”
(Everyevery)