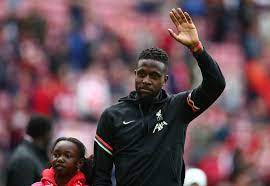 The Reds have revealed who they will be letting go this summer, with the Belgian forward and German goalkeeper among those heading for the exits

Liverpool have announced their retained list at the end of the 2021-22 campaign, with it confirmed that Divock Origi and Loris Karius will be among those released by the Reds as free agents.

The Premier League heavyweights are allowing seven players to move on in total, with four senior stars departing alongside three from the academy ranks.

Origi and Karius are the more notable names to be heading through the exits, with the Belgium forward who netted in the Reds’ triumphant 2019 Champions League final and the German goalkeeper who flopped in the European showpiece 12 months prior to that now looking to land contracts elsewhere.

The Reds have said on their official website of the man who secured cult hero status on the back of continental and derby day heroics: “Eight years after agreeing a move to Anfield from Lille, Divock Origi will leave the club when his contract expires at the end of June.

“The striker began his Reds career in earnest in 2015 – having remained in France for a season-long loan with Lille – and would go on to be involved in some of the most iconic and important moments in the club’s modern history.

“There was Origi’s collection of Merseyside derby goals, six in total, including the 96th-minute Kop-end winner of December 2018 and, fittingly, his final strike for Liverpool to seal victory over Everton in April.

“His contributions to Jurgen Klopp’s team’s Champions League triumph in 2019, meanwhile, have a guaranteed place in club legend.”

It is expected that Origi will join Italian champions AC Milan ahead of the 2022-23 campaign.

What about Karius?
The 28-year-old shot-stopper fluffed his lines badly in a 2018 Champions League final clash with Real Madrid, but Liverpool have said of him: “Karius joined Liverpool from FSV Mainz 05 in the summer of 2016 and went on to play 49 games under Klopp during his first two seasons on Merseyside.

“He started every Champions League match in 2017-18 as Klopp’s men surged to the final in Kyiv, though it would end in personal and collective disappointment with a 3-1 defeat by Real Madrid.

“The German then spent time on loan with Besiktas and Union Berlin before being part of the Reds’ goalkeeping group at the AXA Training Centre during 2021-22.”

Who else have Liverpool released?
The other members of Jurgen Klopp’s senior ranks to have been shown the door at Anfield are Sheyi Ojo and Ben Woodburn.

Ojo, who joined the Reds from MK Dons in November 2011, departs having made 13 appearances and scored one goal, while 22-year-old midfielder Woodburn, the club’s youngest-ever goalscorer, made 11 first-team appearances before being loaned out to the likes of Sheffield United, Blackpool and Hearts.