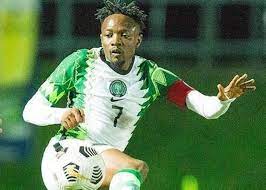 Captain Ahmed Musa thinks a lot of things will change in Nigeria’s senior national team under the leadership of Jose Peseiro.

Judging by his previous records, many had criticised the Nigeria Football Federation for hiring the Portuguese tactician as Super Eagles handler.

Contrastingly, the Turkey-based winger sees things from a different perspective and is upbeat that the three-time African champions would flourish under his guidance.
“I would say the very first time that I met him we spoke a lot,” Musa told the media per Completesports ahead of Thursday’s clash versus Sierra Leone in Abuja.

“And if you have a manager who believes in your country and that he is coming to win the Africa Cup of Nations, I think he knows what he saw that made him say that.

“I will ask Nigerians to still believe in the players because I know we have the best of players that can do that.

“So, it’s left for us the players to prove him right that with what he saw we are going to deliver.”

The former CSKA Moscow and Leicester City winger also talked about Peseiro’s coaching style which he described as unique.

“For me, with the kind of training, I saw I believe the Super Eagles will be very different from what people saw before,” the skipper continued.

“I think with this manager a lot of things will change.”

Nigeria’s last outing at the MKO Abiola Stadium, Abuja was a 1-1 draw against Ghana – a result that dashed the country’s 2022 Fifa World Cup hopes.

Notwithstanding, Musa is aiming for victory against John Keister’s Sierra Leone in order to put smiles on the faces of Nigerians again.
“The last game we played in Abuja was very sad for everyone especially for me it was a very tough moment, there’s nothing we can do because that’s football, in football sometimes you win or lose,” he added.

“Now, we are here for the qualifier against Sierra Leone and everyone in camp is ready to make Nigeria proud once again.

“We know that no one cares about the Eagles because of the World Cup disappointment but we just have to keep pushing and make the fans believe that the Eagles can rise again and I believe we will make Nigeria proud.”
(Goal)

Mr Eazi and Fiancee, Temi Otedola Discuss their Plan to have Intimate Wedding