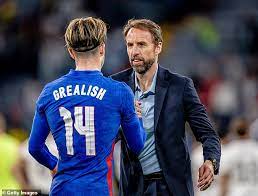 Gareth Southgate has challenged Jack Grealish to improve his tactical knowhow and all-round game if he is to become a regular starter for England.

Harry Kane’s 50th international goal guided England to a 1-1 draw in Germany and their first Nations League point of the campaign. Southgate’s team struggled for rhythm in the final third until the introduction of Grealish with 20 minutes to go as his influence down the left flank helped England force their late equalizer.
In his last 11 caps in a competitive game for England, only three of those have seen Grealish play from the start as Southgate ultimately used him to change a game for him from the bench, including in three of the four knockout matches at last summer’s European Championship run to the final.

When asked if he sees him as a starter or an impact sub, Southgate said: “He can do both. If we didn’t trust him we wouldn’t put him on the pitch with 20 minutes to go in the belief he can make a difference.

“At the start of the game the challenge for the wide players was to attack, defend and to try and score goals – high tactical level and you’ve got to be spot on – and that’s an area Jack can get better at what he did do was carry the ball as the game opened up with a little bit more space and opportunity.
The impact both he and Jarrod Bowen had was really important in those attacking areas. There is a good challenge there among those players but we’ve got to keep pushing them.”

After Saturday’s defeat in Hungary, England were staring at successive Nations League defeats when Jonas Hofmann’s second-half strike took Germany to within three minutes of victory of the Allianz Arena in Munich. However, Kane’s strike capped a strong final quarter of the game from Southgate’s men who deserved their draw.

Southgate said: “I was pleased with the level of performance. This type of fixture challenges everything; technical, tactical, physical, psychological and players had to give everything to get a result. In the first half we were OK but the quality of our passing wasn’t at the level it needed to be.
In the second half, we were passive in that period when we conceded but the response was fantastic. The quality of our attacking play, we created quality chances and deserved something from the game.
That’s a huge credit to the players in showing that mentality not to give in and to keep pushing.
“It’s an important sign for when you are in a team – we’ve got seven or eight players still in there that got to a World Cup semi-final.
That’s important as they put their bodies on the line and on nights like this, you have to do that to get a result.

“These series of matches are about improving and learning as a team and you can’t get that against lesser opposition so the quality of the game tests every part of the player. I think we’ll review it and see things we can get better at but coming away from home and getting a good result was a challenge for the players.
Top teams don’t lose two games on the bounce and they’ve responded to that in the right way.”
(Skysport)