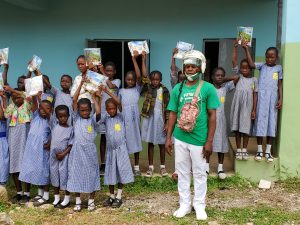 A bike man, Adegoke Adejare has donated writing materials such as books, pencils, pens, and erasers, worth thousands of naira to pupils of St. Paul’s Anglican School, Yanbule in Ibadan, Oyo State.

Reacting to Mr. Adegoke Adejare’s philanthropic act today, the Executive Chairman, Oyo State Universal Basic Education Board, Dr. Nureni Aderemi Adeniran said the Board is full of thanks for his kind consideration to complementing Government’s efforts.

Adeniran, who expressed happiness over Adegoke’s gesture, said though the State Government is poised to make life better for pupils through the provision of basic amenities, it also welcomes philanthropic gestures from members of the public.

Government, he said, “does not have all of the funding. Therefore, if Nigerians can come out to assist the government in this sector, I am certain the future of our children will be more secured”.

During Adegoke Adejare’s visit to the Board, the Chairman promised that the State Government will recognize his kind-heartedness through a commendation letter.

Speaking during the donation, Mr. Adegoke Adejare charged the students to always read their books and urged them to make use of the donated materials to enhance their studies.

He said the donation was his little effort at making his country a better place, by encouraging those who may be in need.

Nicknamed ‘One Nigeria’, Adejare canvassed for Nigerians to collaborate with the Government in the development of the education sector.

“This is what I like to do. I never had the opportunity to attend a formal school, so I have vowed to do my best to support the government in developing the education sector, through little gestures such as this”, he said.

Speaking on behalf of the Management and Teachers, she thanked Mr. Adegoke Adejare for the gesture, assuring that the books would be put into judicious use.