BBNaijaShineYaEye Reunion Show got heated between Angel and Maria 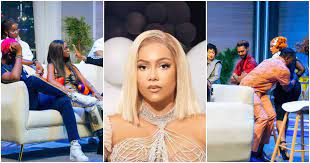 A revisit of the comments made by Maria about Angel in the house soon turned into a heated argument between both ladies. While Maria explained the reasons behind her comments, Angel explained why she didn’t think the comments came from a good place.

Maria reiterates that what she said in the clips is her opinion about her.

She says she doesn’t feel she’s better than Angel or that she’s a saint and Angel is not.
So, everything started from Sammie being angry that Angel carried out a dare with Kayvee.

Angel is asking him why that was a problem for him after Queen also carried out a date with him.
Peace is saying when Angel and Sammie had their issues, she (Peace) felt like nobody listened to Sammie.

Angel says why not? Adding that Sammie likes her.

Peace adds that she also spoke to Angel to hear her own side of the story.
Sammie insists he was “jealous” because he liked Angel.

“Yes, I like her…. It’s possible I liked you more,” adds Sammie.
Angel insists Maria was doing the same things with her in the house (apart from kissing). “You were flirting with Emmanuel and Michael.”

Maria says it was Emmanuel flirted with her and she dragged him to Liquorose.
“The difference between both of us is that I took you as my person but you didn’t take me as your person” – Angel to Maria.
Maria insists she felt Emmanuel flirting with her was cruise, that’s why she’d always drag him to Liquorose.
“I have an opinion about you, but that doesn’t mean its right” – Maria to Angel.

Maria insists she didn’t use a derogatory word about her (Angel).
Angel is unhappy that Nini didn’t shutdown that particular conversation.

“If that conversation was about Arin, would you have shut it down?” – Angel to Nini. Nini said she wouldn’t have because it was also about Angel being strategic.
Michael said he didn’t say anything ooo, He said it was Cross that said something and when he heard, he wanted to drink but the HMs started saying he’s not a good sport.

He said he eventually whispered to Angel because he expected her to take it as cruise.
If only everyone had just “enjoyed” the game for what it was.

APC Flagbearer: The gambit and the gimmick of the game