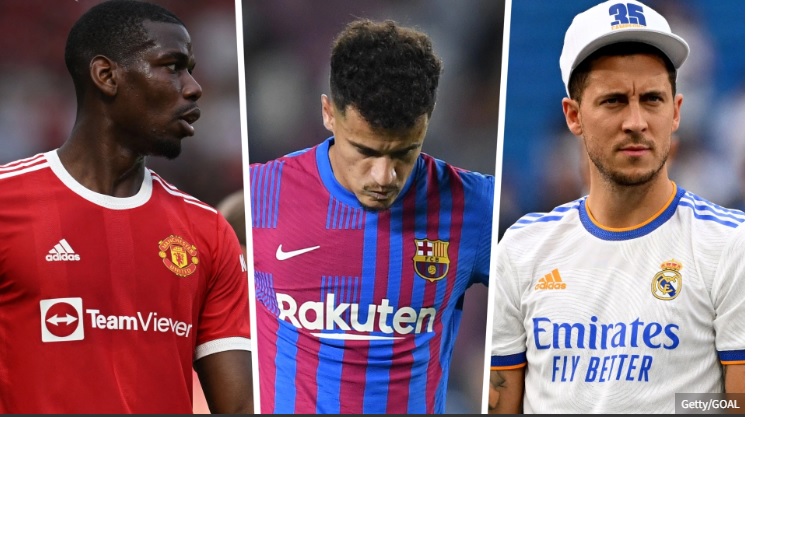 With Paul Pogba having left Man Utd on a free six years after joining for £89 million, GOAL selects the game’s worst big-money deals…

Indeed, as GOAL outlines below, a plethora of the biggest transfers of all the time have proven outrageously costly mistakes…
12 Zlatan Ibrahimovic: Inter – Barcelona (2009)
As Zlatan Ibrahimovic would be the first to tell you, he’s an absolute legend of the game. However, his move to Barcelona ranks as one of the most disastrous deals of all time.

Remember, the Blaugrana didn’t just pay Inter €69.5m (£59m/$75m) for Ibrahimovic, they also handed over 2009 Champions League hero Samuel Eto’o, who then helped the Nerazzurri win the treble, after eliminating Barca in the semis.

By that stage, the Swede’s relationship with then Barca boss Pep Guardiola had completely collapsed, with Ibrahimovic having accused the Catalan of having “no balls” and “sh*tting himself” in front of his former boss Jose Mourinho.

The striker’s agent, the late Mino Raiola, also labelled Guardiola a “coward” and even went for the coach ahead of the 2012 Champions League final.

It’s worth remembering that Ibrahimovic scored 21 goals in all competitions, but what we’re talking about here is arguably the greatest personality clash in football history.

11 Romelu Lukaku: Everton – Man Utd (2017)
‘Big Rom’ may soon secure two spots on our list because, let’s face it, his transfer to Chelsea is going even worse than his move to Manchester United.

He still has time to turn things around at Stamford Bridge, of course, but it is extremely telling that he is already looking to rejoin the Nerazzurri on loan, as GOAL reported.

Given the sums involved, his future remains uncertain, but what we do know for sure is that his time at Old Trafford was a disaster.

Lukaku feels he was poorly treated, while many United fans, including Gary Neville, believe he was neither fit nor talented enough to lead the Red Devils attack.

The one thing we can all agree on is that the £75m ($94m) fee turned out to be a dreadful bit of business.

Well, the world’s most expensive goalkeeper has been a reserve since Edouard Mendy’s arrival for less than a third of the price in 2020.

As revealed by GOAL, Kepa is expected to leave this summer and his time at Chelsea will probably be forever associated with the Carabao Cup.

Firstly, for shamefully refusing to be substituted in the 2019 final, and, secondly, for failing to make a single save and then skying the decisive spot-kick after being brought on solely for the shoot-out in the 2022 tournament decider against Liverpool.

How else to explain how a striker who has consistently struggled to score goals continues earning moves to Europe’s elite clubs for significant sums of money?

Morata did manage 15 Primera Division goals in 2016-17, which convinced Chelsea to sign him from Real Madrid for £60m ($75m), but it remains his best-ever top-flight haul.

Indeed, the Spain international managed just 16 Premier League goals during a miserable 18-month stay at Stamford Bridge, which was cut short in January 2019, when he was allowed to join Atletico Madrid on loan with a view to a permanent transfer.

Morata felt the press were to quick to criticise him during his time in England but it’s impossible to look at his goal return as anything but a disappointment given the size of the outlay.

8 Nicolas Pepe: Lille – Arsenal (2019)
There was a time when it looked like Nicolas Pepe was coming good for Arsenal; a purple patch at the end of the 2020-21 campaign when he looked like the player that had torn it up in Ligue 1 with Lille.

However, Pepe scored one goal last season, his place in the starting line-up having long since been taken by younger, better players.

Arsenal must, therefore, try to recoup a respectable chunk of the club-record £72m ($90m) they paid for his services in 2019.

It won’t be easy. There is talent there but it’s been painfully clear for some time now that the Gunners grossly overpaid for a player coming off the season of his life, in 2018-19.

7 James Rodriguez: Monaco – Real Madrid (2014)
Just like everyone else in the football world, Real Madrid president Florentino Perez fell in love with the fresh-faced, silky-skilled James Rodriguez during Colombia’s run to the quarter-finals of the 2014 World Cup.

Given the attacking midfielder with a keen eye for spectacular goals had long dreamed of moving to the Santiago Bernabeu, a transfer was inevitable, so James became Perez’s latest Galactico.

At times during his first season in Spain, he played like one, ending the 2014-15 campaign with 17 goals in all competitions.

However, while Zinedine Zidane’s appointment as coach in 2016 proved a crucial turning point in Madrid’s modern history, it effectively spelt the end of James’ Blancos career.

He rarely featured under the Frenchman, who at one point claimed that James had asked to be left out of a game against Athletic Club.

In the end, after a couple of years on loan at Bayern Munich, and a dire final season in which he made just eight appearances, the €80m (£68m/$86m) signing left for nothing – the perfect illustration of just how far his stock had fallen since winning the Golden Boot in Brazil.

6 Harry Maguire: Leicester – Man Utd (2019)
Harry Maguire can be a good Premier League defender. He proved that at Leicester. Remember, even Pep Guardiola wanted to sign him in 2019.

Maguire claims that he chose United instead but the truth is that Manchester City baulked at the price. They simply didn’t feel Maguire was worth a world-record fee for a defender, and they have been proven correct.

Some of the abuse Maguire has received over the past three years from Manchester United fans has gone way over “the line”, as the centre-back put it himself.

But there’s no denying that his trophy-less spell at Old Trafford has been a bitter disappointment and the decision to make his club captain has long since been made to look completely ridiculous.

As if you need reminding, United paid £80m ($100m) for Maguire; they wouldn’t even get half that fee now.

He may not be “sh*t”, as Rafael van der Vaar infamously stated, but the England international certainly ranks as a colossal waste of money.

5 Eden Hazard: Chelsea – Real Madrid (2019)
A transfer 10 years in the making, Eden Hazard’s move to Real Madrid appeared doomed from the moment the winger turned up overweight for pre-season training.

In fairness to Hazard, he was desperately unfortunate with injuries, having had an almost clean bill of health for the duration of his time at Chelsea.

However, even when he has managed to get a run of games together in Spain, he has looked a very cheap imitation of the player who had illuminated the Premier League for seven years.

Hazard has got his hands on some important trophies, including the Champions League, but he played about as much part in Madrid’s 2021-22 triumph as Gareth Bale – and it wasn’t for the want of trying on the Belgian’s part, which probably makes the whole situation even sadder.

Make no mistake about it, most fans are delighted to be well rid of a player that they’d long since given up on producing his undoubted world-class quality on a consistent basis.

Indeed, some irate supporters on the Stretford End not only booed the France midfielder during the Premier League clash with Norwich in April, they also shouted ‘F*ck off, Pogba!’

Losing such a valuable asset for nothing still stings, though. United, after all, paid a world-record £89.5m to re-sign Pogba from Juventus in 2016.

Now, after six seasons, one Europa League, one Carabao Cup and a string of pitiful performances and shameful come-and-get-me pleas to rival clubs, Pogba is heading back to where he came from.

Again, much to most fans’ relief.

3 Ousmane Dembele: Dortmund – Barcelona (2017)
The shock loss of Neymar to Paris Saint-Germain in the summer of 2017 left Barcelona in a tight spot.

Yes, they had received a world-record fee for the Brazilian, but every club in the world knew they had money to burn and were desperate for a replacement.

Indeed, Dortmund saw Barca coming a mile off, playing hard ball on Ousmane Dembele until the Catalans cracked, making the ultimate panic-buy by handing over an initial €105m (£90m/$112m) for a player with just one good Bundesliga season under his belt.

The France international’s talent is beyond dispute but his potential remains utterly unfulfilled and he is now, gallingly for Barca, set to leave on a free transfer after five years plagued by injury and ill-discipline.

2 Antoine Griezmann: Atletico Madrid – Barcelona (2019)
Antoine Griezmann humiliated Barcelona in 2018 by openly flirting with a €100m (£86m/$107m) transfer to Camp Nou before publicly rejecting them at the end of a video documentary produced by Blaugrana defender Gerard Pique.

The fans were furious. They wanted nothing more to do with the Atletico Madrid ace.

Bartomeu, though, inexplicably went back in for Griezmann the following year, agreeing to pay the €120m (£100m/$130m) buy-out clause in the Frenchman’s contract, as if determined to prove a point.

The versatile attacker had his moments at Camp Nou but they were few and far between and he went crawling back to Madrid in 2021, re-joining Atletico on loan with a view to a permanent transfer.

1 Philippe Coutinho
One of the most important transfers in Liverpool’s history but the worst in Barcelona’s.

Was he an attacker, a midfielder or something in between? Josep Maria Bartomeu certainly had no idea but he went out of his way to sign the Brazilian regardless.

His most significant contribution during his four years on Barca’s books was scoring two goals against the Catalans while on loan to Bayern Munich in 2020.

After spending years trying to offload Coutinho, they let him join Aston Villa for just €20m (£17m/$21.5m) in 2022 as they desperately tried to restore some financial order at Camp Nou after very nearly going bankrupt under Bartomeu.
(Goal)