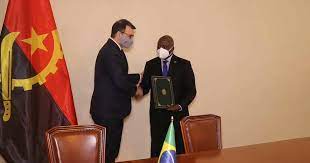 “Angola should open its borders more to the new Brazilian entrepreneurs who want to invest in different sectors,” this is the opinion of a Brazilian couple who have been settled in the country for more than 30 years. The entrepreneurs bet on the confectionary and metallurgical industry.

Ana Alexandre has already trained more than 300 young people in the confectionary business in Luanda. Today she has 40 national employees and is satisfied with the opportunity she found in Angola.

“I brought innovation, we hire by values, not by skills. We give training to any employee who comes here to work with us, to any employee,” said Alexandre.

Carlos Rosado de Carvalho who is an economist believes that the visit of the head of Brazil’s diplomacy comes at a time when that country’s investment in Angola is almost non-existent.

“since August 2008 until now AIPEX, which is the body for attracting foreign investment and promoting exports, has registered two Brazilian investments worth 108 thousand,” said Carlos.

Angola wants a strategic partnership with Brazil to prioritize agro-industry and military security.

Brazil, the first country in the world to recognize Angola’s independence, signed the cooperation agreement on family farming development in irrigated areas.

Carlos Alberto Franco França spoke of the opportunities that the crisis in Europe can generate in the partnership between the two countries.

“The grain productivity in Brazil is far superior to that of countries such as the United States, for example, and so that we can grow together with Africa, we would start with Angola and apply these conditions that allowed Brazil to expand agricultural production,” said Carlos Alberto Franco França, Brasilian Foreign Affairs minister.

In this visit, Brazil announced an investment portfolio of over 1.7 billion euros in the areas of military security, pharmaceuticals, construction, and agribusiness.
(Africanews)

PMB and the side effects of selecting a successor