JENNIFER LOPEZ: Shows Off New ‘J B’ Manicure in Honor of Ben Affleck 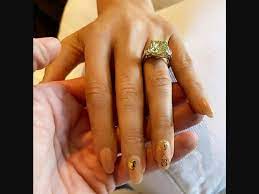 Jennifer Lopez is finding all sorts of ways to show off her love for her soon-to-be husband Ben Affleck … just ask her manicurist.

J Lo just got a set of fresh nails … which included the initials “J” and “B” on her ring finger and a heart on her middle finger … courtesy of celebrity manicurist, Tom Bachik.

And, if it wasn’t already obvious, Tom let folks on social media know exactly what it stands for in his caption. He wrote, “If you know… then you know 🏹 Jen and Ben forever.
Of course, J Lo’s huge green diamond ring was the perfect touch to the nail art in the photos.
As we’ve told you, J Lo announced that she and Ben got engaged (again) back in April nearly 20 years after he first asked Jen for her hand in marriage. We spotted that she had been wearing her massive diamond on her ring finger a little before … and lo and behold!

The longtime lovers first got engaged in 2002, but called it quits in 2004, before they got married. They ended up rekindling about a year ago and the rest is history.

Surely, they have a lot on their plate as they hunt for a house to blend their families together … and get ready to say “I do”.

But first … a fresh mani to honor her fiancé is top on the priority list.
(TMZ)

‘Star Wars’ calls out racism after attacks on Moses Ingram

Why I may never get married – Timaya