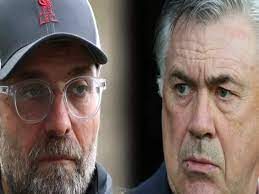 “I’ve refereed two French Cup finals at the Stade de France,” the 39-year-old told UEFA. “Anyone in France who loves our game considers it as the “French football church”, because France won the World Cup there in 1998 – the national team’s first-ever major trophy. It’s a special place, to be sure.”
It’s a fair point, with Thiago and Fabinho both coming back from injury ahead of this game.

Jurgen Klopp fell short of confirming the duo would start tonight’s Champions League final, but here is what he had to say:

“It looks good for Thiago and Fabinho. Fabinho trained yesterday and Thiago will train later today. The mood is good, very good. Really excited to be here now and getting a feeling for a stadium, location and that is all good.”

In their absence who would you start, Liverpool fans? James Milner, Jordan Henderson and Naby Keita seem to be the obvious choices. Let us know what you think…
Trent Alexander-Arnold has come unstuck defensively on a few occasions in big games this season. It will be interesting to see how he copes against Vinicius Jr, who caused so many problems against Chelsea and Man City.
Mo Salah has made it clear he always wanted to play Real Madrid in the final to get revenge for the defeat in 2018 when he was forced off with a shoulder injury after Sergio Ramos’ challenge.

Thirteen Liverpool fans have used a speedboat in a desperate bid to get to France for the Champions League final after their easyJet flight was cancelled.

It comes as football fans and families embarking on half-term getaways faced long queues at the Port of Dover and UK airports.
The group of Liverpool fans took it upon themselves to make their own way across the Channel late on Friday after their flights were cancelled.

They had been turned away from John Lennon Airport in Liverpool after expecting to board a 4am flight.

Two of the fans, Adam and Tom Dring, flew down to Heathrow to try to get another flight but they were unsuccessful, so decided to team up with family friend Paddy O’Toole who lives in Jersey, according to the Liverpool Echo.

Mr O’Toole then contacted a friend who runs a boat chartering firm called La Mourier on the island.

“They got a flight to Jersey last minute and they met up with us and asked could we get them to France,” he told the newspaper.

“We felt sorry for the young lads so we had to do something.”

Divock Origi is leaving Liverpool on a free transfer and is expected to join AC Milan once the season is over.

He’s scored some monumental goals for the Reds since joining from Lille in 2014 – can he deliver one more on his final game?

Remember his goal against Tottenham in the 2019 Champions League final in Madrid. You bet against him getting on the scoresheet this evening.