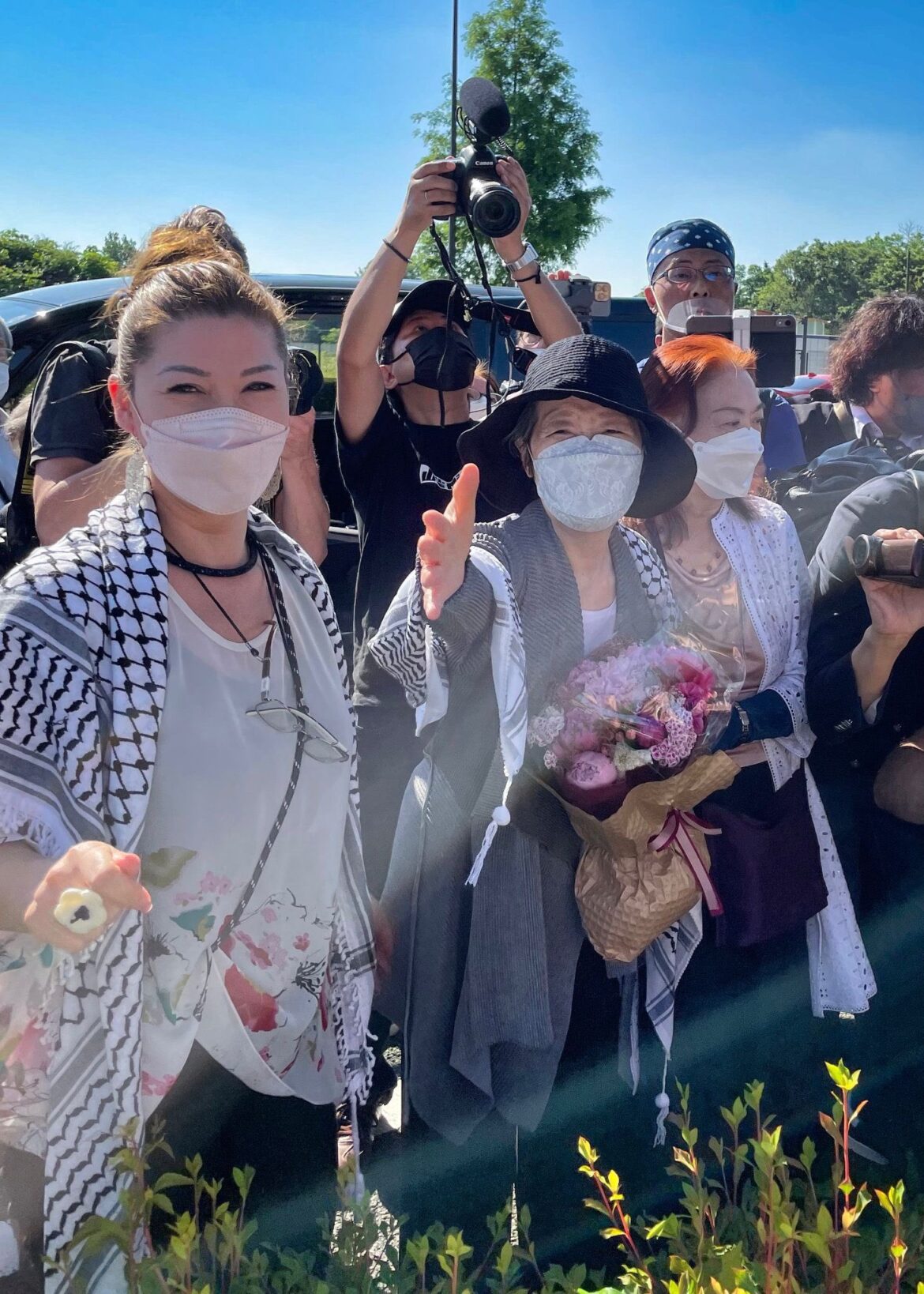 Fusako Shigenobu, 76, was one of the world’s most notorious women during the 1970s and ’80s when her left-wing group carried out attacks worldwide in support of the Palestinian cause.

Fusako Shigenobu, who co-founded the once-feared armed group Japanese Red Army, was released from prison on Saturday after serving a 20-year sentence and she apologized for hurting innocent people.

“I feel strongly that I have finally come out alive,” she said, welcomed by her daughter and a crowd of reporters and supporters in Japan’s capital Tokyo.

Shigenobu, 76, was one of the world’s most notorious women during the 1970s and ’80s when her left-wing group carried out armed attacks worldwide in support of the Palestinian cause.

Shigenobu left the prison in Tokyo in a black car with her daughter as several supporters held a banner saying, “We love Fusako”.

The Palestine Youth Movement welcomed Shigenobu’s release and described her as a “lifelong comrade of the Palestinian people and struggle”.

“I apologize for the inconvenience my arrest has caused to so many people,” Shigenobu told reporters. “It’s half a century ago … but we caused damage to innocent people who were strangers to us by prioritizing our battle, such as by hostage-taking.”

Shigenobu travelled to Lebanon in 1971 and founded the Japanese Red Army, which linked up with Palestinian fighters to become an implacable foe of Israel.

The group turned into one of the world’s most feared armed groups because of its deadly and spectacular acts, from plane hijackings to hostage-taking, mostly in the 1970s.

Shigenobu is believed to have masterminded the 1972 machinegun and grenade attack on Tel Aviv’s Lod Airport, which killed 26 people and wounded 80 others.

Member Kozo Okamoto, who was injured and arrested in the Israeli airport attack, was released in 1985 in a prisoner exchange between Israeli and Palestinian forces. He is reportedly in Lebanon. Okamoto and several other members of the group are still wanted by Japanese authorities.

The Japanese Red Army also took responsibility for the takeover of the US consulate in Kuala Lumpur, Malaysia in 1975.

After bombing a US military facility in Naples, Italy, in 1988, the group conducted no more major attacks and faded from view in Japan.

Coordinated operations
Shigenobu, the former soy-sauce company worker turned fighter, was arrested in Japan in 2000 and sentenced to 20 years behind bars six years later for her part in a siege of the French embassy in the Netherlands.

She had lived as a fugitive in the Middle East for 30 years before resurfacing in Japan.

Shigenobu’s daughter May – born in 1973 to a father from the Popular Front for the Liberation of Palestine (PFLP) – hailed her mother’s release on social media.

Shigenobu maintained her innocence over the siege, in which three Red Army assailants stormed the French embassy, taking the ambassador and 10 other staff hostage for 100 hours.

Two police officers were shot and seriously wounded. France ended the standoff by freeing a jailed Red Army member, who flew off with the hostage-takers in a plane to Syria.

Shigenobu did not take part in the attack personally, but the court said she coordinated the operation with the PFLP.

‘An ugly end’
Born into poverty in post-war Tokyo, Shigenobu was the daughter of a World War II major who became a grocer after Japan’s defeat.

Her odyssey into Middle East geopolitics began by accident when she passed a sit-in protest at a Tokyo university when she was 20.

Japan was in the midst of campus tumult in the 1960s and ’70s to protest against the Vietnam War and the government’s plans to let the US military remain stationed in the country.

She announced the Red Army’s disbanding from prison in April 2001, and in 2008 was diagnosed with colon and intestinal cancer, undergoing several operations.

Shigenobu said on Saturday she will first focus on her treatment and explained she will not be able to “contribute to the society” given her frail condition.

But she told reporters: “I want to continue to reflect [on my past] and live more and more with curiosity.”

In a letter to a Japan Times reporter in 2017, she admitted the armed group had failed in its aims.

“Our hopes were not fulfilled and it came to an ugly end,” she wrote.