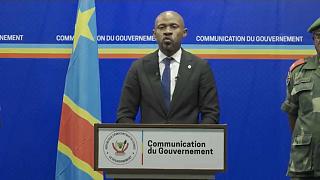 The Democratic Republic of Congo said it will suspend RwandAir flights and summoned Kigali’s ambassador after authorities accused Rwanda of supporting the M23 rebel group.

Kinshasa this week said Kigali was backing the March 23 Movement, which Rwanda denies, amid renewed clashes between the Congolese army and the militia in the east of the country.

The decision was taken after an extraordinary meeting of the Superior Defence Council chaired by Congolese President Felix Tshisekedi.

“It was decided to immediately suspend flights from the RwandAir aviation company to the Democratic Republic of Congo,” said Communications Minister Patrick Muyaya.

“It was also decided to summon the Rwandan ambassador to notify him of the total disapproval of the Congolese government”, he added.

RwandAir responded Saturday by cancelling “with immediate effect” all flights to Kinshasa, Lubumbashi and Goma, the airline said in a statement.

The Congolese government alleges that the Rwandan government is supporting M23 rebels in the country’s east, citing military equipment apparently found, along with testimonies from locals and images captured by soldiers.

Primarily a Congolese Tutsi group, M23 is one of more than 120 armed groups that roam eastern DR Congo, many of which are a legacy of regional wars more than two decades ago.

It briefly captured the provincial capital Goma in late 2012, before the army quelled the rebellion the following year.

But M23 resumed fighting this year, accusing the Congolese government of failing to respect a 2009 agreement under which its fighters were to be incorporated into the army.

Recent clashes between the military and M23 rebels in eastern DRC have displaced 72,000 people, the United Nations said Friday.

Investigation: How Cholera killed many in Jigawa after govt claimed It spent billions on epidemic preparedness in PHCs