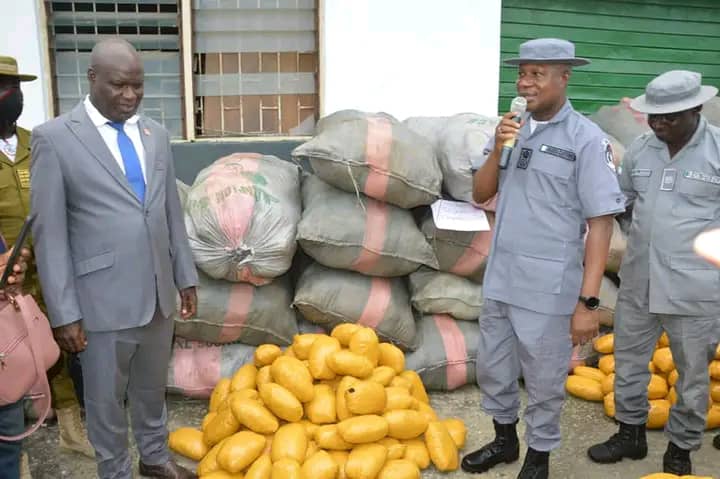 The Nigeria Customs Service Western Marine Command on Thursday said it intercepted 32 sacks of cannabis Sativa and 828 bags of foreign rice among others.

The Area Controller of the Command, Comptroller Abubakar Umar disclosed this during a press briefing held at Ibafon Apapa Lagos.

Comptroller Umar said the total Duty Paid Value (DPV) of the seizures is N190, 145,500. He said “Due to the nature of the seized item (PMS), the Command on the approval of the Headquarters auctioned the product and the amount generated as fees have been remitted to the Federation Accounts.

With the approval of the CGC, the seized Cannabis Sativa will be handed over to the Commander, Marine Unit of the National Drug Law Enforcement Agency (NDLEA), as part of the existing inter-agency collaboration between the NCS and the NDLEA.” He added.

While commending the Comptroller General of Customs (CGC), Colonel Hameed Ibrahim Ali (Rtd), he noted that the successes recorded were due to the commitment of the Officers of the Command and inter-agency collaboration.

He reassured his commitment to addressing smuggling activities and noted that collaboration with the traditional community leaders would be sustained for mutually beneficial reasons.

“As the Area Controller of the Command, I would continue to operate an open-door policy, give a sense of belonging to all Officers/Men as well as instill discipline, for us to better fulfill the Command’s mandate,” he promised.