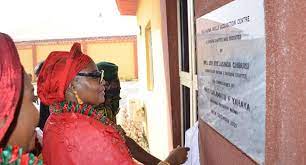 In her efforts to Standardize and strengthen NAOWA schools across the country, the President Nigerian Army Officers’ Wives Association (NAOWA) Salamatu Faruk Yahaya commissioned a furnished a block of 6 classrooms and an ICT center at NAOWA Nursery, primary school Ginginya Barack, Sokoto

Addressing journalists at the occasion, Mrs. Yahaya stated that, the commissioning of the project is the affirmation of her vision to sustain the legacies of her predecessors of unity and development.

She commended the chairperson of NAOWA 8 Division Mrs. Gloria Bassey for ensuring the completion of the project within a short period of time and also expressed appreciation for the high quality of the work done

She stated that the classrooms were constructed to provide additional space and accommodate more pupils and enhance a conducive learning environment.

She noted that NAOWA has adopted a new approach toward standardizing all her schools through structural development, staff training, adequate resource management, and provision of facilities to the institutions.

She also provided medical equipment such as incubators, oxygen concentrators, patients monitor, infant resuscitators, and phototherapy machines to the Army hospital at the Barack.

She thanked the staff of the school for their efforts in ensuring and uplifting the standard of learning in the school.

To encourage them, she donated bags of rice, jerricans of vegetable oil, and instructional materials to the staff.

She commended Mrs. Bassey’s gesture saying she has written her name in the history of NAOWA.

Earlier, Mrs. Bassey thanked Mrs. Farouk for providing funds for the construction of the school which she said has created a conducive learning environment and would enhance good performance by the pupils.

The highlight of the event is the entertainment of the guests by the cultural troops.