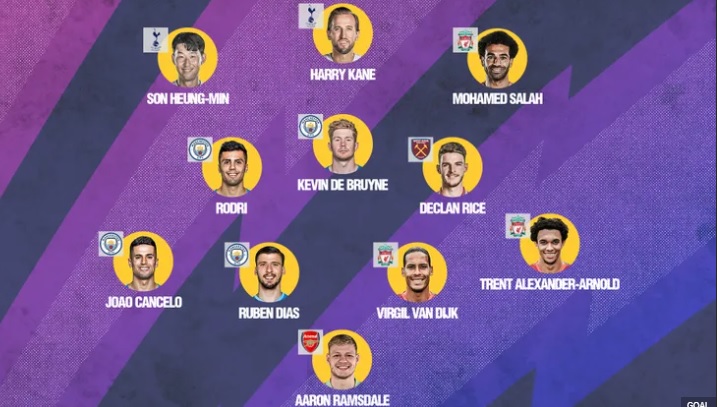 After a thrilling end to the English top-flight campaign, GOAL selects a line up made up of the best performers in the 2021-22 season

The Premier League season is over for another year, with Manchester City again crowned champions after a dramatic final-day win over Aston Villa.

Liverpool, Chelsea and Tottenham will join them in the Champions League next season, while Arsenal and Manchester United will have to make do with Europa League football.

It was a season with many memorable moments and where a host of top names put in consistently high-level performances on a weekly basis.

GK: Aaron Ramsdale (Arsenal)
Arsenal finished two points short of fourth place, due primarily to an unexpected lift Tottenham received from hiring a world-class manager in Antonio Conte mid-season, but we should not let that obscure the huge progress Mikel Arteta has made, having come eighth in each of the last two seasons.

That would not have been possible without Ramsdale, who was considered a waste of money at £24 million last summer, but turned out to be the perfect fit, pulling off brilliant saves throughout the campaign as well as laying the foundation for Arteta’s tactics with his intelligent distribution.

The goalkeeper’s season tailed off as Arsenal’s did, and yet more than anyone else in the Gunners’ squad, Ramsdale’s leadership, vocal instructions to his error-prone defenders, and technical ability represents Arsenal’s upward trajectory through 2021-22.

RB: Trent Alexander-Arnold (Liverpool)
In a campaign in which the Liverpool right-back completed the set in terms of top-flight trophy wins with the FA Cup, doing so at the tender age of 23, it is only right that we recognise another remarkable season for Alexander-Arnold – whose brilliance ought not to be normalised.

Only Mohamed Salah bagged more Premier League assists this season than Alexander-Arnold’s 12, while he made the most open-play crosses in the division (127) and ranked seventh among all players for total shot-creating passes in open play.

He was, as ever, a relentless creative presence on the right flank, which was particularly important during an extended period of 2021-22 when Andrew Robertson was below his best on the left.

Jurgen Klopp has consistently relied upon Alexander-Arnold’s capacity to drive forward and, especially against deeper defences, swing dangerous crosses into the box.

He deserves to make this list for the commanding way in which he has led his team through an exhausting campaign, despite missing the vast majority of 2020-21 through injury.

You only have to look at the way Liverpool wobbled against Wolves on the final day of the season, when Ibrahima Konate and Joel Matip were pulled all over the place by Pedro Neto and Raul Jimenez, to see Van Dijk’s influence.

He is their calming presence: an unflappable character whose deceptive pace and strength ensure Liverpool are always in control of the situation.

CB: Ruben Dias (Manchester City)
Last year’s Premier League Player of the Season has quietly continued his brilliant form through another title-winning campaign for Manchester City, leading Pep Guardiola’s very high defensive line and ensuring it is not as vulnerable as it ought to be.

What marks Dias out from his team-mates is his battling personality; he is not afraid to get stuck in and will not be bullied, which has been particularly important in a season when Guardiola has been forced to change his back four more often than he would have liked.

He makes more clearances (2.2 per game) than any other City player, reflecting an ability to be no-nonsense when it matters. It is a welcome counterpoint to Aymeric Laporte and John Stones, who can both look a little light in the challenge.

LB: Joao Cancelo (Manchester City)
Along with Alexander-Arnold, Cancelo has helped to redefine the role of the full-back.

The Portugal international seemingly plays four positions simultaneously, coming infield to join the Man City central midfielders; popping up in the left half-space to create chances; defending as part of the back four; and overlapping down the left.

His seven league assists this season is a career high (and puts him just one short of Kevin De Bruyne in the City charts), while Cancelo is also the club leader for tackles (2.3 per game) and interceptions (1.6 per game).

There is surely nobody in the world better in their position than Cancelo, a man who has changed our entire perception of what a left-back can be.

CM: Rodri (Manchester City)
A lot of what Rodri does goes unseen. He does not show up as the leader in many statistical metrics and he does not do anything particularly highlight-worthy at either end of the pitch, but there is a decent case for Rodri being the Premier League’s most valuable player this season.

There is a reason why anyone who stopped Man City this season – particularly Southampton and Crystal Palace, who did so twice – began by ensuring they surrounded Rodri at all times. He is Guardiola’s metronome, with impeccable technique under pressure that connects City’s centre-backs with their more creative players.

City need perfection in this position, and they have it, with Rodri attempting the third-most passes in the entire division (2796), with an accuracy of 91.8%. He is one of only two midfielders to make the top 20 for pass per game (his 87.4 is nearly matched by Thiago Alcantara’s 87.0).

Off the ball, Rodri is quick to anticipate and shut down counterattacks, often so deftly that these actions aren’t even measured as tackles or interceptions. Without Rodri, Man City could not play such a high line or pin opponents back.

CM: Declan Rice (West Ham)
Everybody is looking for their own Rodri, and among the ‘Big Six’ only Liverpool – with Fabinho – have one.

That is what makes Rice such a sought after player. Not only is he as brilliant a defensive player and metronomic passer as those two, the West Ham star also has a ball-carrying capacity that takes him to a whole other level.

Rice is the highest-ranking midfielder in the Premier League for ‘progressive distance’, measuring how far, in yards, a player carries the ball forward. He is also third overall for carries into the final third, just behind Bernardo Silva and above Kevin De Bruyne.

Rice, then, is not the anchor he is often portayed as, even if he does make an impressive 2.2 tackles and 1.8 interceptions per game. The 23-year-old is the complete midfielder: a press-evading and attacking dribbler, a powerful number six, and an intelligent distributor all at once.

CM: Kevin De Bruyne (Manchester City)
His final noteworthy action of the season, to dribble past two Aston Villa players and slide a perfect cross to the back post for Ilkay Gundogan, summed up De Bruyne’s campaign – and won the title for Man City.

He also won the Premier League’s Player of the Season award, and few will begrudge him that.

De Bruyne may only be third in the combined goals and assists, behind Harry Kane and Mohamed Salah, but his goals tally of 15 is a career high – and his form peaked at just the right moment in the title race. After a slow start, he amassed 30 goal contributions in his final 28 games.

This season De Bruyne has moved back into a more central position after spending last year drifting largely out to the right wing. Dipping infield, De Bruyne is shooting more often and creating more chances in the dribble – catching the eye in a way he didn’t during pandemic football.

RW: Mohamed Salah (Liverpool)
This was one of Salah’s most prolific seasons in English football, despite the fact he spent a month at the Africa Cup of Nations, which is testament to his relentlessness through what has been a ridiculously long campaign for him personally.

It has not quite hit the level of his 2017-18 heroics, but Salah’s 23 goals and 13 assists from just 30 Premier League starts is frankly ludicrious.

Of all the forwards now at Jurgen Klopp’s disposal, the Egyptian is the one undroppable player, his menace from the right wing drawing an entire defence towards him to create space for others.

The sooner the Reds can get him to sign a new contract the better, because despite the form of Luis Diaz, Salah is a Liverpool icon they will struggle to replace.

ST: Harry Kane (Tottenham)
Kane and Son Heung-min became the most lethal strike partnership in Premier League history this season, and with Antonio Conte’s exacting tactical instructions taking them to an even higher level, there is the outside chance that Tottenham can do something special next season.

Certainly the England captain is likely to only get better. His capacity to play as No.10 and a No.9 simultaneously is one of the most innovative things to have come out of the English top-flight in recent years, and in 2021-22 the sight of him playing sweeping diagonals from central midfield was a joy to watch.

Had it not been for another slow first half of the season, Kane would already be closing in on Wayne Rooney in second place in the Premier League’s all-time scorer list. A long summer rest will be welcome.

LW: Son Heung-min (Tottenham)
Sharing the award with Mohamed Salah, Son won his first Golden Boot after scoring 23 goals in 35 games – a record made all the more impressive by Tottenham’s difficult start to the season.

It is hard to believe, given how the campaign finished, that they began by winning nine points from nine games under Nuno Espirito Santo.

Son has been magnificent, not just scoring regularly but becoming a crucial part of Antonio Conte’s tactical strategy by running ahead of Harry Kane to become the de facto No.9. His movement stretches opposition defences and has allowed for Conte’s direct style to take hold in north London.

He is also, based on chances created, the sixth-most creative player in the division and ended the campaign with seven assists. If it wasn’t already clear, this season has confirmed that Son is in the ‘world-class’ category.