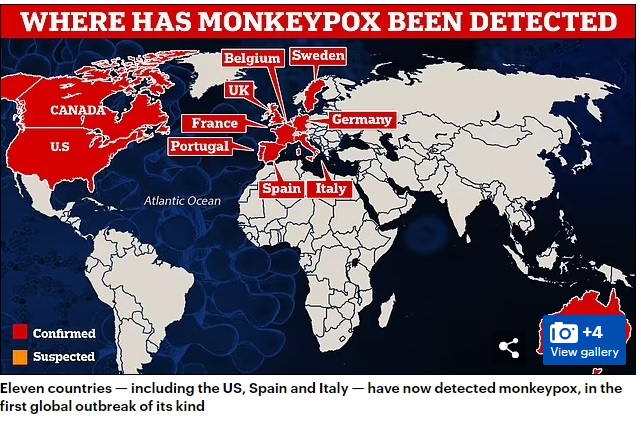 The World Health Organization (WHO) says it expects to discover more cases of monkeypox as it expands surveillance in countries where the disease has yet to be identified.

Between May 13 and May 21, at least 92 laboratory-confirmed cases and 28 suspected cases of monkeypox were reported to the WHO from 12 countries where the virus is not endemic. In non-endemic countries, one case is considered an outbreak.
Eleven countries have been reporting monkeypox cases since it was first discovered in 1970: Benin, Cameroon, the Central African Republic, the Democratic Republic of the Congo, Gabon, Ivory Coast, Liberia, Nigeria, the Republic of the Congo, Sierra Leone and South Sudan.

By May 23, five more countries reported their first confirmed cases, bringing the total number of nations reporting outbreaks this year to 17.

No associated deaths have been reported to date in those countries in the current outbreak.

The following countries have newly reported confirmed cases of monkeypox so far this year:
May 13 – May 21

Austria, Denmark, Israel, Scotland and Switzerland.
Argentina’s health ministry said it had detected a suspected case of monkeypox in Buenos Aires but that it was still carrying out tests. So far there have been no confirmed monkeypox cases in Latin America.
What is monkeypox and what are its symptoms?
Monkeypox is a usually mild virus that causes fever as well as a bumpy rash. It is mostly transmitted to people from wild animals but human transmission is also possible.

The virus is most common in remote parts of Central and West Africa.

According to the World Health Organization (WHO), symptoms of monkeypox typically include:

Fever
Intense headache
Muscle aches
Back pain
Low energy
Swollen lymph nodes
Rash or lesions
The rash tends to first develop on the face before spreading elsewhere on the body, including on the soles of feet and palms of hands. They can also be found on the mouth, genitals and eyes.
Symptoms typically last between two to four weeks, with most people recovering from the illness without treatment. Newborns, children and people with underlying immune deficiencies may be at risk of more serious symptoms and death from monkeypox.

How does monkeypox spread?
Monkeypox is transmitted to humans through close contact with an infected person or animal, or with material contaminated with the virus.

The rash, bodily fluids and scabs are particularly infectious. Clothing, bedding, towels or objects like eating utensils that have been contaminated with the virus from contact with an infected person can also infect others.

Ulcers, lesions or sores in the mouth can also be infectious, meaning the virus can spread through saliva. People who closely interact with someone who is infectious, including health workers, household members and sexual partners are therefore at greater risk for infection.

The virus can also spread from someone who is pregnant to their fetus, or from an infected parent to a child during or after birth through skin-to-skin contact.

It is not clear whether infected people whose symptoms are not showing yet can spread the disease.

Monkeypox treatment
In most cases, monkeypox symptoms resolve on their own without the need for treatment.

For those who are infected, it is important to take care of the rash or sores by letting them dry out if possible or covering them with a dressing to protect the area. Both infected and uninfected people should avoid touching any sores.

Mouth rinses and eye drops can be used as long as cortisone-containing products are avoided. Vaccinia immune globulin (VIG) may be recommended for severe cases. An antiviral known as tecovirimat, or TPOXX, can also be used to treat monkeypox.
Although it causes a less serious illness, monkeypox is in the same family as smallpox.

There are several vaccines available for the prevention of smallpox that also provide some protection against monkeypox.

In 2019, a newer vaccine – MVA-BN, also known as Imvamune, Imvanex or Jynneos – was approved for use against smallpox although it is not yet widely available.