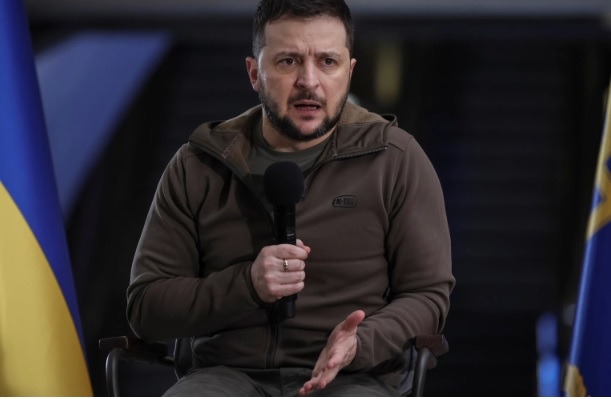 President Zelensky has said the war can only be fully resolved through diplomacy and negotiations, despite his confidence that Ukraine can prove victorious on the battlefield.

Ukraine’s First Lady, Olena Zelenska, has given a rare TV interview, admitting that her family was “torn apart” by the war, like so many other Ukrainian families.

Russia has intensified its efforts to capture the whole eastern region of Luhansk.

Fierce fighting has been reported around Severodonetsk – a city which the regional governor says is being “destroyed”.

Moscow has revealed its list of nearly 1,000 Americans banned from entering Russia – including President Biden and Secretary of State Antony Blinken.

Biden has signed off a bill that confirms nearly $40bn (£32bn) of fresh American aid for Ukraine.

A further €250m (£211m) has been pledged by Portugal, whose leader visited Kyiv today.

Ukraine’s First Lady Olena Zelenska has given a rare interview with her husband, President Volodymyr Zelensky.

It is only the second time the couple have been seen together since the beginning of the war in Ukraine.

Ms Zelenska said “no one takes my husband away from me, not even the war,” but also that they had barely seen each other since Russia invaded Ukraine, and had been “torn apart” like other families.
(BBC)