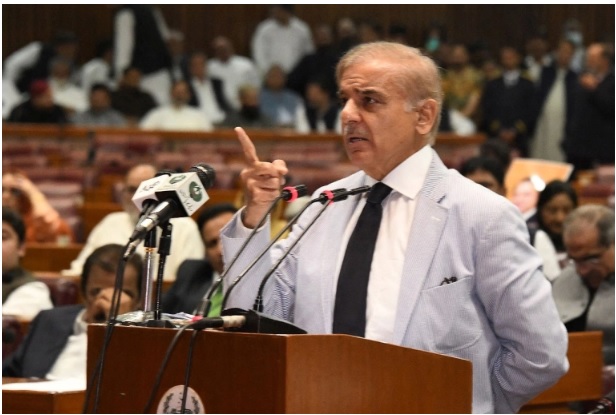 “The team will be in Doha during May 18-25 as part of ongoing discussions with the Pakistani authorities on economic developments and policies to promote macroeconomic stability,” an IMF official told Al Jazeera on Thursday.
At the core of the negotiations are subsidies, especially those on petroleum products which are directly linked to inflation.

But Islamabad only received $3bn and the programme was not fully implemented because Khan’s government abandoned the agreements to end subsidies, expand the tax net and improve collection.

With Khan now removed from office, the month-old Pakistani government led by Prime Minister Shehbaz Sharif is asking the IMF to increase the size and duration of its programme.

“The new government is a coalition of a dozen parties that assumed power with a razor-thin majority. It has been paralyzed due to Imran Khan’s relentless campaign against the army leadership and the government,” political economist Yousuf Nazar told Al Jazeera.

“The government fears that if it increases oil price, it might fuel anti-government sentiments and provoke violent protests. Khan’s party leaders have warned about a civil war.”
Pakistan has reached out to the IMF a staggering 22 times since 1958. But its various civilian and military governments failed to implement reforms as directed by the global agency.

Now, the nuclear-armed nation of 220 million people faces a double whammy of a politically charged atmosphere and a teetering economy. There are almost daily rallies by the government and the opposition.
Khan’s supporters are demanding an early election while Sharif’s coalition government is trying to steer clear of unpopular but necessary economic decisions.

To further complicate the governance crisis, global commodity prices and inflation are rising. A record post-pandemic surge in oil prices and cautious lending have also slowed growth in the country.

Weeks before he became Pakistan’s finance minister, Miftah Ismail told Al Jazeera the fuel subsidy was equivalent to providing relief to the rich.

“The poorest of the society do not drive. Surely there are other mechanisms to provide targeted relief to those who need it the most,” he said.

But since he took office, his boss, Prime Minister Sharif, has different plans to taking unpopular economic decisions.

“The premier does not want to burden the masses, so he refused to hike the fuel prices on an immediate basis. There is no need to rush to petrol pumps because the prices are not going to go up. However, the prices will be adjusted accordingly,” Ismail said in a news conference this week.
Political economist Nazar, a former chief strategist at Citigroup’s emerging markets division, says he sees fundamental reforms as a necessity in Pakistan.

“Pakistan has continued to follow an import substitution protectionist trade policy and remains highly vulnerable to energy crises. It relies heavily on remittances. Its tax to GDP [gross domestic product] ratio has fallen to 9.5 percent from about 12 percent in 2016 due to the dominance of military and special interests in policymaking,” he said.

“Pakistan needs at least $5bn immediately to calm the markets and stop the slide in its currency which has dropped by 6 percent in May so far,” he said.

“Further delays around policy decisions and the IMF programme will likely add to these mounting external pressures,” he said.

Zook said fuel subsidies appear to be a key point of Pakistan’s negotiations with the IMF.

“In our view, this demonstrates the challenges the new broad coalition government will face in passing reforms in the run-up to the general elections due by mid-2023,” he said.

Zook, however, said there were “some recent signs” that the government is ready to make concessions.

“The government has also given positive signals on its commitment to the IMF programme and its desire to extend the programme to mid-2023. Still, programme negotiations will likely prove bumpy due to the political challenges around economic reforms,” he told Al Jazeera.
(Al Jazeerz)