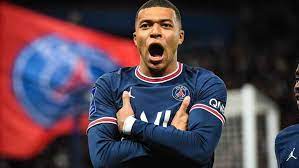 Kylian Mbappe’s mother has revealed that the striker has agreements with both Paris Saint-Germain and Real Madrid as he preparess to make a definitive call on where he will continue his career as of next season.
GOAL confirmed on May 17 that the World Cup-winning France international has agreed personal terms with La Liga heavyweights Madrid as he readies himself for a new challenge in Spain.

A few days prior to that, at the UNFP awards ceremony, the 23-year-old forward admitted that “my decision is made, yes, almost”.
Fayza Al-Amari, the player’s mother and agent, says there is a chance he will remain at Parc des Princes.

It is up to the France star to decide which club he wants to join, as there are agreements in place with both PSG and Madrid.

“We will not have new meetings to discuss Mbappe’s future, these meetings are now over,” she told Kora Plus.

“Now we have found an agreement with both Real Madrid and PSG and the discussions are over because it is Kylian who has to choose now.

“The two offers are similar, there are no big differences, now we are waiting for Kylian’s choice.

“The Real Madrid offer in which we have complete control over image rights, and on the other hand, there is a financial compensation that compensates for this. The two offers do not differ greatly between them.”
French publication L’Equipe announced on Thursday that Mbappe was preparing to announce his intentions to the world on Sunday, after taking in a final Ligue 1 outing of the season with PSG against Metz 24 hours prior to that.

GOAL has subsequently learned that no definitive date has been set for a big reveal, with the highly-rated striker’s representatives merely stating that a decision could be announced over the weekend.

There were suggestions that the popular Telefoot television programme – which airs on a Sunday morning – could be used as a platform in which to make a statement on future plans, but Mbappe’s entourage have rejected those claims.

With that in mind, there is a chance that something will be said in the wake of the 2021-22 campaign-closing fixture on Saturday.
PSG have, throughout a long-running saga, always maintained that they will not be giving up on Mbappe without a fight.
They have seen him register 168 goals for the club through 216 appearances and are understandably reluctant to see him walk away as a free agent.

No information regarding Mbappe’s decision has been leaked as yet, as cards are played close to collective chests, but the end of a soap opera is now in sight and communication should be offered inside the next 72 hours.
(Goal)