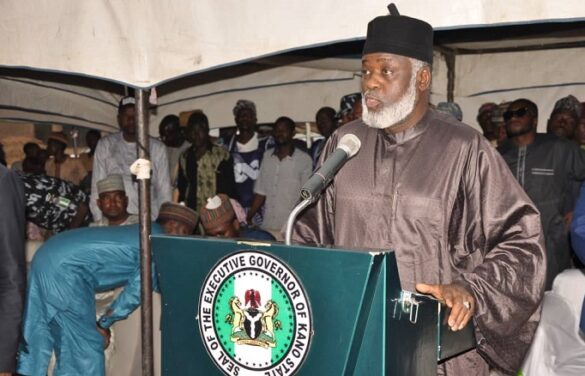 The race for the successor of Governor Ganduje in Kano has since commenced, and the state is set to start the political fireworks, especially amongst pundits, who have the ambition of moulding public opinion in a particular direction. As a concerned son of the soil, my voice would not be silent in this endeavor, with a special bias toward the success of Gawuna.

Yes Gawuna, the man anointed by Ganduje to succeed him. So if you are against that move, please discontinue reading.

Certainly, there is a lot of anger against Ganduje by many, who may be eager to take advantage of some shortcomings of the governor to avenge on Gawuna. But I hasten to warn that, whoever goes that way, would be incorrectly positioned, because Gawuna is not the cause of the problem. Rather, his coming may even rescue or salvage the situation.

Governor Ganduje officially anointed Gawuna as the gubernatorial candidate of the APC, at a stakeholders’ meeting at the Government House Kano recently. And since then, the political pot of the state has been boiling with convolutions, as contenders keep moving back and forth, between the ruling party, APC, and a third force, the NNPP, raised and promoted by former Governor, Eng. Rabiu Musa Kwankwaso.

In anointing Gawuna, Ganduje announced thus, “The decision to make my deputy the flag bearer was unanimously taken after exhaustive deliberations with all the stakeholders of the party. All party procedures were followed before arriving at this position. I was Deputy Governor before becoming Governor. This time, my deputy, Dr Nasiru Yusuf Gawuna, is our choice for the gubernatorial seat come the 2023 general election. He will contest alongside Murtala Sule Garo as his running mate. Gawuna is a complete gentleman, who knows what is right and what is wrong. A person who is reliable and very loyal.”

The testimony of reliability and loyalty are added advantages that would help in grounding Gawuna.

His remarkable performance as the chairman of the Taskforce on Covid-19 has given him the chance to market himself as a reliable and result-oriented politician. This again, is an added mileage to his credibility and polished political credentials.

In the public court, Ganduje may be charged with a number of offenses, including the adoption of Garo as deputy to Gawuna, by side-lining a number of eminently qualified people, but in the same court, some may be quick to convict Kwankwaso for the similar or even greater offense.

Ganduje might have goofed by anointing Garo, but Kwankwsso has equally goofed by placing Abba Yusuf over and above allies that have been loyal to him for long.

By repeatedly refusing to give the ticket to tested and trusted allies with concrete credentials like Arc. Aminu Dabo, Dr. Dangwani, Eng. Rabiu Suleiman Bichi, Habu Ibrahim Fage, and giving it to Abba Yusuf, whose most pronounced qualification is that he is married to Kwankwaso’s niece or daughter, it would be extremely difficult for the analysts to look at the issue beyond the net of nepotism.

That is what may work against Kwankwaso, and give Gawuna a bit of an advantage.

If we set aside nepotism, which the dictionary describes as the practice among those with power or influence, of favouring relatives or friends, especially by giving them jobs and positions, one cannot see the qualities possessed by Abba Yusuf that are not possessed by Arc. Aminu Dabo, or Eng.Rabiu Suleiman Bichi, or Dr. Dangwani, or Habu Ibrahim Fage, who are people that have long been loyal to Kwankwaso.

In politics and public administration, Gawuna is not a weakling. For eight years, he was the chairman of Nasarawa Local Government, one of the strategic local governments in Kano, which is a testimony to his grassroots contact with the people in politics.

Yes, in politics, repeating a position is only possible if you are grounded and trusted by the people. And there is no record of such a political feat from Abba Yusuf.

Also, Gawuna is humble, modest, respectful to the high and low, academically polished, and proficient at public relations. The same cannot be said of the little-known Abba Yusuf, whose major achievement is the successful commissioning of a good Hausa song in his favour, with the lyrics, Abba Gida gida.

Indeed, Ganduje’s biggest goof may be in bringing in Garo, who, based on assessment from afar, is arrogant, crudely or poorly educated by the standards of western or modern education, and almost always, easily irritated.

I don’t know him, but as an analyst, I would continue to gauge him from the prism of public perception, which seems to score him low, but score Gawuna high.

If Ganduje is accused of imposition in anointing Gawuna and Garo, Kwankwaso did worse. He dictatorially released the names of candidates without recourse to the take of stakeholders, by bringing in Abba Yusuf as the consensus candidate for the 2023 governorship election of the party, NNPP.

Garo is to Ganduje what Abba Yusuf is to Kwankwaso. Both are seen as incapable but brought in to serve a purpose, which is for their own selfish interests.