Menu
Home Entertainment Kwesi Arthur: I have a bigger vision than taking over from Sarkodie
Entertainment

Kwesi Arthur: I have a bigger vision than taking over from Sarkodie 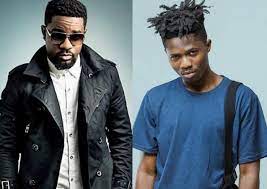 Kwesi Arthur, says he has no intention to compete and take over from Sarkodie as the next rap icon in the country.
According to him, there is far bigger things he wants to achieve with his music than focus on what people expect him to do.
He said this on a collaborative Twitter Space between Pulse Ghana and KalyJay, a social media influencer, dubbed #PulsexKalyJaySpace on Tuesday.

His comments were in response to a question that suggested he “could have easily taken over form Sarkodie with regard to rap” in Ghana, if he hasn’t been “lazy.”

He shot that idea down by pointing out that Sarkodie is a pioneer that he admires greatly.
I’m not {talking about} this takeover from Sarkodie. We have a bigger vision. We are preaching on these songs. The vision is bigger than that. People will say what they want to say. I respect Sarkodie so much. Sarkodie is from my city. He paved the way for some of us to do what we are doing. We are taking this music to the world,” he said on #KalyJaySpace.

Sarkodie recently teamed up with Kwesi Arthur on a single, “Coachella”, which was nominated for this year’s Vodafone Ghana Music Awards.

In the 2020 edition of the awards scheme, Sarkodie gave Kwesi Arthur a run for his money when the young artiste won the Rapper of the Year category.

According to data from KPMG, the accounting firm that audited the votes, Kwesi Arthur beat Sarkodie with only 3% of the votes.

Kwesi Arthur secured 30% of the votes and Sarkodie secured 27% of the votes.
Kwesi Arthur has been promoting his album, Son of Jacob, which was released last month. In an interview with this reporter, he said he is “thankful” about how it has been received regardless of how long it took for it to be released – three to four years.

The album, which has 15 tracks, has gained a lot of traction since it was released.

When asked the song that has impressed him the most on the album, he noted that although most people are feasting on “Drama”, “Toxic” is also doing “wonders on the low.”
(Pulse)

Blood Sisters: How a Single Act Can Change the Trajectory of One’s Life