Sri Lanka: Emergency power given to army, police after violence 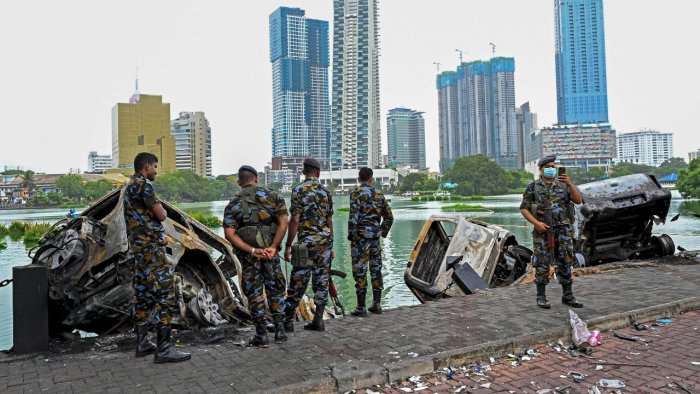 Sri Lanka has granted its military and police emergency powers to arrest people without warrants after a day of violence that killed seven people and injured more than 200 and resulted in the resignation of Prime Minister Mahinda Rajapaksa, the older brother of sitting President Gotabaya Rajapaksa.

As the Indian Ocean nation battles its worst economic crisis in history, thousands of protesters defied an islandwide curfew until 7am on Wednesday to continue protesting.
Shortages of fuel, food and medicine brought thousands onto the streets in more than a month of protests that had been mostly peaceful until this week.

Some reports surfaced of angry protesters attacking politicians associated with the government late on Monday, setting fire to homes, shops and businesses they own.
The situation had largely calmed by Tuesday, barring reports of sporadic unrest, said police spokesman Nihal Thalduwa, adding that some 200 people had been injured on Monday.
Reporting from Colombo on Tuesday, Al Jazeera’s Minelle Fernandez said: “There is a heavy military presence. On our way, we were stopped at multiple checkpoints manned by the air force, some by the army and the navy.”

According to the latest decision, the military can detain people for up to 24 hours before handing them to the police, while any private property can be searched by forces, the government said in a gazette notification on Tuesday.

“Any person arrested by a police officer shall be taken to the nearest police station,” it said, fixing a 24-hour deadline for the armed forces to do the same.

‘Who can monitor’ possible abuses?
Some analysts expressed concern over the potential for abuse of the measures in a country that has already been under a state of emergency since Friday, announced by the president as protests escalated.
“In a situation where there is both a state of emergency and curfew, who can monitor to ensure these regulations are not abused?” said Bhavani Fonseka of the Centre for Policy Alternatives think-tank based in Colombo.
The violence on Monday that led to Mahinda Rajapaksa’s resignation had happened in spite of the state of emergency
He spoke to hundreds of gathered supporters on Monday after initial, unconfirmed reports that he was considering stepping down.
After his remarks, many of them, armed with iron bars, stormed a camp of anti-government protesters, beating them and setting fire to their tents.

Police used water cannon and tear gas to disperse the skirmishes, after having initially done little to hold back the government supporters, witnesses told the Reuters news agency.

No light at the end of the tunnel
Thousands streamed into the streets in celebration after Rajapaksa’s resignation, but the mood quickly became tense.

Protesters attempted to tear down the gates of Temple Trees, his residence in the centre of Colombo, where broken glass and discarded footwear littered the surrounding streets on Tuesday, after some of the night’s worst clashes.

It has sought assistance from multilateral lenders such as the World Bank and the International Monetary Fund, as well as Asian giants India and China.

Former Finance Minister Ali Sabry, who resigned on Monday along with the rest of Rajapaksa’s cabinet, has said useable foreign reserves stand at as little as $50m.
(News Agencies)

Finland: At the verge of asking to join NATO