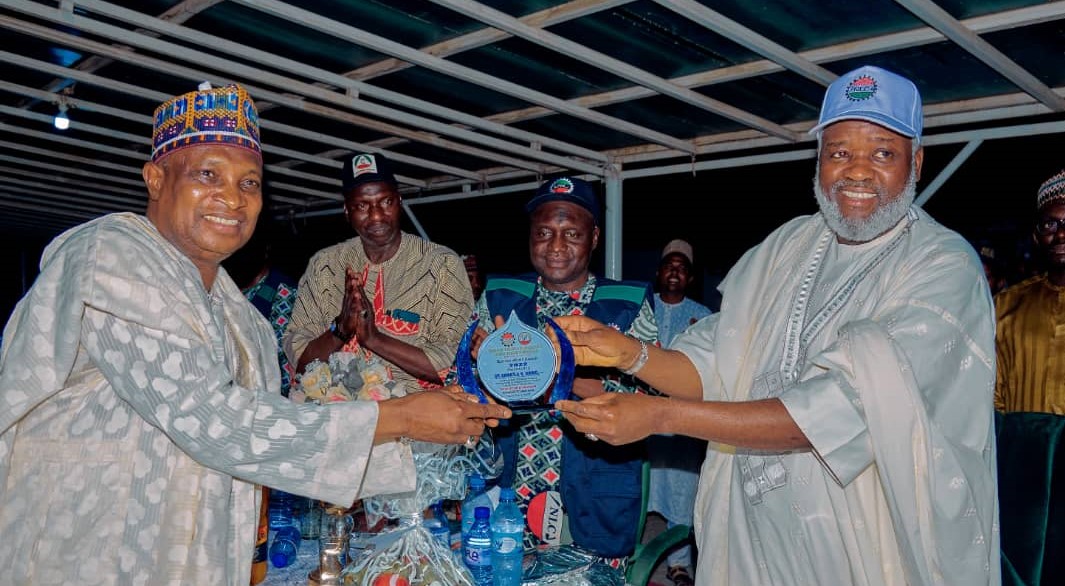 Kano State Commissioner of Police, CP Sama’ila Shuaibu Dikko received an award for outstanding performance in community policing from the state council of the Nigerian Labor Congress, NLC, on Sunday.

The award was presented to the CP by Governor Abdullahi Umar Ganduje who was represented by his Deputy, Dr. Nasiru Yusuf Gawuna during the 2022 May Day Award/Dinner Night organized by the Nigeria Labor Congress and Trade Union Congress in collaboration with the Office of the Head of Service held at the Government House as part of activities to commemorate 2022 May Day celebration.

Speaking to Stallion Times shortly after receiving the award, CP Dikko said: “I appreciate NLC for finding me worthy to be recognized.

“Words cannot express my gratitude and appreciation to the government, the good people of the state, other security agencies, and our community policing stakeholders for their prayers, continuous support, and cooperation.

“God’s willing, we will continue to serve you to the best we can in line with policing vision of the Inspector General of Police, IGP Alkali Baba Usman.”

A statement, Monday, by the Chief Press Secretary to the Deputy Governor, Hassan Musa Fagge said that Governor Ganduje expressed appreciation for the role the NLC is playing in the sustenance of industrial peace and harmony in the state.

He pointed out that industrial peace has amply demonstrated the level of esteem, maturity, confidence, and patriotism the labor and its leadership have exhibited towards the development of Kano State.

“We sincerely appreciate your selfless disposition and service to our citizenry,” he added.

According to the statement, the Ganduje said since the inception of his administration, the government accorded priority attention to policies and programs that have a direct bearing on the life of workers and will strive to consolidate on the gains recorded for the betterment of their condition of service and welfare to the highest possible limit.

He congratulated the recipients of the awards for being outstanding in their endeavors and urged them to continue to be committed and dedicated to the service of the State.

The statement further said the NLC Kano Council, Chairman, Comrade Kabiru Ado Minjibir appreciated the effort of the State Government for releasing one billion naira recently for the settlement of retirees’ benefits, adding that the annual event’s theme: “Labor, Politics and the quest for good governance and development in Nigeria” is unique because labor and politics are co-related.

The Head of Civil Service, Usman Bala Muhammad said the Kano state government has maintained implementation of various reform initiatives to reposition the service for better results in which the outcome is translated to the general wellbeing and improved service delivery for the benefit of the entire citizenry, the statement added.