Menu
Home World News Philippine: Why the 2022 election is so significant
World News

Philippine: Why the 2022 election is so significant 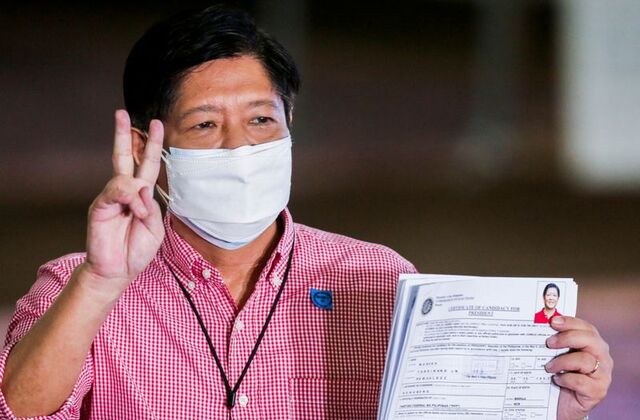 Ferdinand Marcos Jr, the son of late Philippines dictator Ferdinand Marcos, poses for pictures after filing his certificate of candidacy for president in the 2022 national election, in Pasay City, Metro Manila,

The Philippines goes to the polls on May 9 to choose a new president, in what analysts say will be the most significant election in the Southeast Asian nation’s recent history.

Outgoing President Rodrigo Duterte leaves office with a reputation for brutality – his signature “drug war” has left thousands dead and is being investigated by the International Criminal Court (ICC) – economic incompetence, and cracking down on the media and his critics.
Duterte has also been criticised for his handling of the coronavirus pandemic, which has killed at least 60,439 people in the archipelago.

There are 10 people battling to replace him, but only two stand a chance of winning.
The first is frontrunner Ferdinand Marcos Jr, popularly known as “Bongbong” and the namesake of his father, who ruled the Philippines as a dictator until he was forced from office and into exile in a popular uprising in 1986.

The second is Leni Robredo, the current vice president and head of the opposition, who has promised more accountable and transparent government and to reinvigorate the country’s democracy.

“This election is really a good versus evil campaign,” University of the Philippines Diliman political scientist Aries Arugay told Al Jazeera. “It’s quite clear. Duterte represents dynasty, autocracy and impunity. Robredo stands for the opposite of that: integrity, accountability and democracy.”
Some 67.5 million Filipinos aged 18 and over are eligible to cast their vote, along with about 1.7 million from the vast Filipino diaspora who have registered overseas.
Polling stations will open at 6am (22:00 GMT) and close at 7pm (11:00 GMT). The hours have been extended because of the coronavirus pandemic and the need to avoid queues and crowds.

Once the polls close, counting gets under way immediately, and the candidate with the most votes wins. There is no second round so the name of the new president could be known within a few hours. The inauguration takes place in June.
As well as the presidential race, Filipinos are choosing a new vice president – the position is elected separately to the president – members of congress, governors and thousands of local politicians including mayors and councillors.

Politics can be a dangerous business in the Philippines and there is the risk of violence during both campaigning and the election itself.
In one of the most horrific incidents, dozens of people were killed and buried by the roadside in 2009 by a rival political clan in what became known as the Maguindanao massacre.
Opinion polls suggest Marcos Jr remains in the lead although Robredo appears to be closing the gap.

The 64-year-old dictator’s son attended the private Worth School in England and studied at Oxford University – Marcos Jr’s official biography says he “graduated” but the university says he emerged with a “special diploma” in social studies.

He entered politics in the family stronghold of Ilocos Norte in 1980, and was governor of the province when his father was forced out of power and democracy restored.
In 1992, he was elected to congress – again for Ilocos Norte. Three years later, he was found guilty of tax evasion, a conviction that has dogged him ever since but does not seem to have hindered his political career.

Marcos Jr was elected a senator in 2010, and ran unsuccessfully for the vice presidency six years later when he was pipped to the post by a resurgent Robredo.

On the campaign trail, Marcos Jr has talked of “unity” but has provided little detail on his policies and has avoided media interviews and debates.

His running mate is Sara Duterte-Carpio, Duterte’s daughter, who took over as mayor of Davao City from her father and is leading the field for vice president.
Robredo is the current vice president and a human rights lawyer who got into politics in 2013 after her husband – a government minister – was killed in a plane crash.

She threw her hat into the ring at a relatively late stage, and has relied on a network of pink-clad volunteers to win over voters across the archipelago.

Thousands have turned out for her rallies, some of then standing for hours in their hot sun waiting to hear the presidential hopeful speak. Robredo, whose running mate is Senator Francis “Kiko” Pangilinan, is running on a platform of good governance, democracy and an end to corruption.

Ferdinand Marcos became president of the Philippines in 1965, winning over Filipinos with his charisma and rhetoric, and taking control of a country that appeared at the time to be one of Southeast Asia’s emerging powerhouses.
Backed by the United States, Marcos won a second term in office in 1969, but three years later he declared martial law claiming the move was necessary to “save” the nation from communists.

For the next 14 years, he ruled the country as a dictator.

More than 3,200 people were killed – their bodies often dumped by the road side as a warning to others – and even more tortured or arbitrarily jailed, according to the US academic and historian, Alfred McCoy.
Marcos’s biggest rival, Benigno Aquino, was assassinated as he got off a plane at Manila airport.

The killing shocked Filipinos at a time when they were increasingly angry at the corruption and extravagance of the Marcos regime. Even as many lived in poverty, the Marcos family bought properties in New York and California, paintings by artists including impressionist master Monet, luxury jewellery and designer clothes.

Transparency International estimated in 2004 that the couple embezzled as much as $10bn during their years in power, and Imelda, Marcos’s wife, has become a byword for excess.
But since the former dictator’s death in Hawaii in 1989, the Marcos family have sought to rehabilitate themselves, trying to portray the dictatorship as some kind of golden age.
In 2016, Duterte allowed Ferdinand Marcos to be buried in Manila’s heroes cemetery, complete with a 21-gun salute.

Now the Duterte family is allied with the Marcos one, and their bid also has the support of other politically influential dynasties in a country where blood ties are more important than any political party.

“The meteoric resurgence of the Marcoses is itself a stinging judgement on the profound failures of the country’s democratic institutions,” academic Richard Javad Heydarian wrote in a column for Al Jazeera in December. “Decades of judicial impunity, historical whitewashing, corruption-infested politics and exclusionary economic growth has driven a growing number of Filipinos into the Marcoses’ embrace.”

Many worry the election of Marcos Jr, particularly if Duterte becomes vice president as widely expected, could herald a new era of repression.
“The two are the offspring of two strongman rulers,” Arugay said. “Can we expect restraint and inclusive government? You don’t need to be a political scientist to answer that question.”

Earlier this week, some 1,200 members of the clergy of the Catholic Church endorsed Robredo and Pangilinan describing them as “good shepherds”. At least 86 percent of Filipinos are Catholic.

“We cannot simply shrug, and let the fate of our country be dictated by false and misleading claims that aim to change our history,” they said.

Will the result be accepted?
When Marcos Jr lost the vice presidential race by 263,000 votes in 2016, he challenged the result in court.
With the stakes much higher this time around, some analysts worry he could do so again if Robredo manages to pull off a victory.

The role of social media
Filipinos are avid users of social media and the platforms have played a key – and divisive – role in the election, intensifying the more toxic elements of political campaigning.

Marcos Jr and his team have been accused of using – and abusing – online platforms.

In January, Twitter suspended more than 300 accounts promoting his campaign, which it said breached rules on spam and manipulation.
Joshua Kurtantzick of the Council on Foreign Relations says Marcos Jr has also benefited from “the legacy of Duterte, who fostered the spread of disinformation and made it easier for another strongman to win”.
Senatorial race
While all eyes are on the presidential race, it is worth keeping an eye on the senate, too.

Leila de Lima, who has spent the past five years imprisoned in the national police headquarters in Manila after questioning Duterte’s drug war, is campaigning for office again.

The opposition senator is hopeful she may soon be released after two key witnesses withdrew their testimony.
De Lima was the target of vicious, misogynistic attacks by Duterte and his supporters before she was charged in 2017 with taking money from drug lords while she was justice secretary in the government of the late Benigno Aquino III.

De Lima has denied the charges and Human Rights Watch has said the case is politically motivated.
(Al Jazeera)

Rich Paul parties with LeBron James on his girlfriend’s birthday