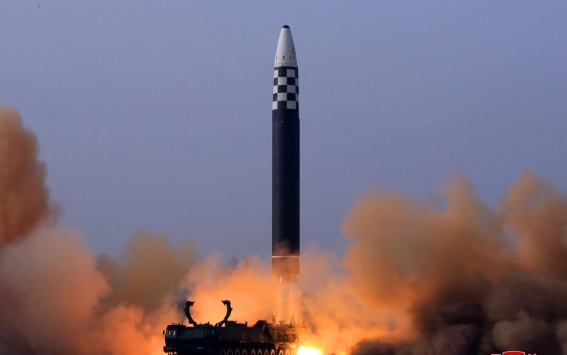 North Korea fired a ballistic missile three days before the inauguration of South Korean President-elect Yoon Suk Yeol who has vowed to take a hard line against Pyongyang.

South Korean military said North Korea tested what is believed to be an submarine-launched ballistic missile (SLBM) off its east coast around 05:07 GMT on Saturday from Sinpo, where Pyongyang has a major shipyard.
Japan’s defence ministry also said the projectile could be a ballistic missile. Japanese public broadcaster NHK, citing government sources, said it landed outside Japan’s exclusive economic zone.

Japanese Prime Minister Fumio Kishida ordered officials to prepare for all “unforeseeable situations” and secure the safety of aircraft and ships, but there were no immediate reports of damage.

The launch was apparently North Korea’s first demonstration of a submarine-fired ballistic system since October last year when it test-launched a new short-range missile from the 8.24 Yongung – its only known submarine capable of firing a missile.
On Wednesday, North Korea fired a ballistic missile toward the sea off its east coast, South Korea and Japan said, after Pyongyang vowed to develop its nuclear forces “at the fastest possible speed”.

The latest launch was likely North Korea’s 15th missile firing this year, including its first test of an intercontinental ballistic missile since 2017, which demonstrated potential range to reach the entirety of the US mainland.

The United States assessed North Korea was preparing its Punggye-ri nuclear test site and could be ready to conduct a test there as early as this month.

Robert Kelly, a North Korea expert at Pusan National University, said the spate of launches was likely meant to “send a message” to Yoon’s incoming administration in South Korea.

“I think the idea is to signal to the South Koreans, ‘we’re still here, you must take us seriously’. The North Koreans have a long history of doing this. It’s a mix of signaling and bullying,” Kelly told Al Jazeera.
Last month, North Korean leader Kim Jong Un pledged to speed up development of his country’s nuclear arsenal. He presided over a huge military parade that displayed intercontinental ballistic missiles (ICBMs), as well as what appeared to be SLBMs being carried on trucks and launch vehicles.

“Instead of accepting invitations to dialogue, the Kim regime appears to be preparing a tactical nuclear warhead test. The timing will depend most on when the underground tunnels and modified device technology are ready,” said Leif-Eric Easley, a professor at Ewha University in Seoul.

“A seventh nuclear test would be the first since September 2017 and raise tensions on the Korean Peninsula, increasing dangers of miscalculation and miscommunication between the Kim regime and the incoming Yoon administration.”

Yoon takes office on Tuesday. US President Joe Biden is to visit South Korea and meet with him on May 21.
In October, North Korea test-fired a new, smaller ballistic missile from a submarine, a move analysts said could be aimed at more quickly fielding an operational missile submarine.

Experts say the unusually fast pace in testing activity underscores a brinkmanship aimed at forcing the United States to accept the idea of the North as a nuclear power and remove crippling sanctions.

North Korea has been pushing hard to acquire an ability to fire nuclear-armed missiles from submarines, which in theory would bolster its deterrent by ensuring a survivable capability to retaliate after absorbing a nuclear attack on land.

Ballistic missile submarines would also add a maritime threat to the North’s growing collection of solid-fuel weapons fired from land vehicles, which are being developed with an apparent aim to overwhelm missile defense systems in South Korea and Japan.
(News Agencies)

Art and Architecture in Transition: Why is the British Museum suddenly returning Benin’s looted artefacts