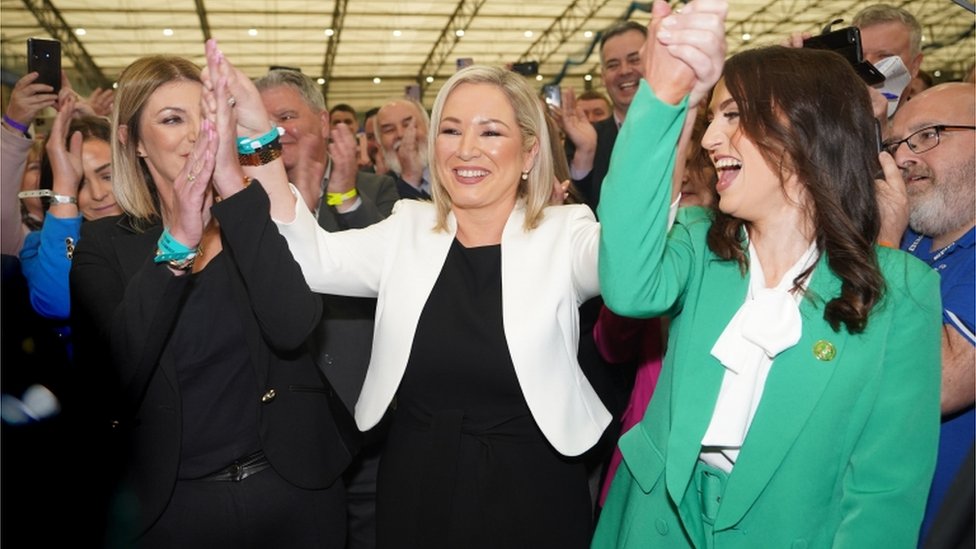 Counting in the Northern Ireland Assembly election has resumed with the Republican Party Sinn Féin set to win the most seats for the first time.

It is vying with the Democratic Unionist Party – whose vote share dropped – for the entitlement to nominate the next first minister.

A unionist party has been the largest in government since Northern Ireland was formed in 1921.

The cross-community Alliance Party has made gains, with 63 of 90 seats filled.

Sinn Féin winning the most seats would be a first for a party in Northern Ireland that designates as nationalist.

The DUP won 28 seats at the last assembly election in 2017, just ahead of Sinn Féin’s 27.
So far this time round, Sinn Féin has 21 Members of the Legislative Assembly (MLAs), the DUP has 19, Alliance has 14, the Ulster Unionist Party (UUP) has seven, and the Social Democratic and Labour Party (SDLP) has four after a poor performance.

Despite seeing a surge in vote share, the Traditional Unionist Voice (TUV) regained only one seat; one independent unionist has been elected.

Counting resumed in three centers – Titanic Exhibition Centre in Belfast, Ulster University in Jordanstown and Meadowbank Sports Arena in Magherafelt – at 09:00 BST.
The ultimate goal of Sinn Féin – whose leader in Northern Ireland, Michelle O’Neill, declared the election a “historic day” – is for Northern Ireland to leave the UK and become one country with the Republic of Ireland.

But a victory for Sinn Féin in this election does not mean a vote on Irish reunification – also known as a border poll – would be imminent.

From IRA politics to NI’s biggest party
It also stated that the Northern Ireland Secretary would agree to hold a poll if it appeared likely that a majority of people wanted a united Ireland.

Successive opinion polls suggest that is not yet the case, with the most recent, published in April, putting support at about a third.

While party leader Mary Lou McDonald said on Friday night her party was on the cusp of securing the post of first minister, she said planning for a unity referendum would come within a “five-year framework”.
While the office of the first and deputy first minister is an equal one with joint power, the allocation of the titles is regarded as symbolically important.

For Sinn Féin to be installed in the role, the majority of unionist assembly members would have to agree to power-sharing, as Northern Ireland operates under a system of mandatory coalition.

But DUP leader Sir Jeffrey Donaldson has said that he will not be nominating any ministers to the executive until the issue of the Northern Ireland Protocol is resolved, with “decisive action” needed from the UK government.
(BBC)

Lewis Hamilton: Mercedes car is improving but ‘not sure why’ after stronger showing in practice at Miami Grand Prix