Art and Architecture in Transition: Why is the British Museum suddenly returning Benin’s looted artefacts 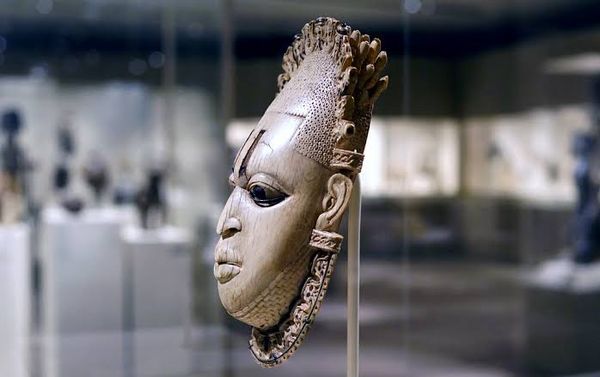 “An Englishman does everything on principle: he fights you on patriotic principles; he robs you on business principles; he enslaves you on imperial principles.” – George Bernard Shaw (1856-1950)

It is paradoxical that the British who vehemently refused to return the original Festac ’77 pendant mask of Queen Idia is now by their own volition returning all looted Benin artifacts in its custody.

The British are nevertheless going to facilitate the building of a state-of-the-art museum dubbed, the Edo Museum for West African Art in the ancient city Benin adjacent to the Oba’s palace designed by the award-winning Ghanaian-British architect, Sir David Adjaye to house the returned legacies.

The horizontal motifs adopted by Architect Adjaye in the façade of the proposed museum reminiscence the Bight of Benin building constructed in the 1940s at Jos Museum.

How many Nigerians are aware that the 1974 edition of the Guinness Book of Records classifies the erstwhile city walls of Benin as “the largest earthworks carried out anywhere in the world prior to the mechanical era”?

Simply put, as far back as the 11th century (some 1000 years ago) the walls of ancient Benin City were, “four times longer than the Great Wall of China, and consumed a hundred times more material than the Great Pyramid of Cheops.”

Unfortunately, between 1897 and 1914 the British embarked on systematic looting and destruction of Benin including its iconic earthworks. 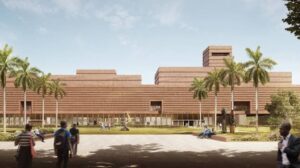 “Great Benin, where the king resides, is larger than Lisbon (the Portuguese capital since).

All the streets run straight and as far as the eye can see. The houses are large, especially that of the king, which is richly decorated and has fine columns. The city is wealthy and industrious. It is so well governed that theft is unknown and the people live in such security that they have no doors to their houses.”

In contrast, London at the same time is described by Bruce Holsinger, professor of English at the University of Virginia, as being a city of;

“…thievery, prostitution, murder, bribery and a thriving black market made the medieval city ripe for exploitation by those with a skill for the quick blade or picking a pocket”.

In history, Benin City was also one of the first cities in the world to have any semblance of street lighting;

“Huge metal lamps, many feet high, were built and placed around the city, especially near the king’s palace. Fuelled by palm oil, their burning wicks were lit at night to provide illumination,”

So, what eventually led to the fall of Great Benin? 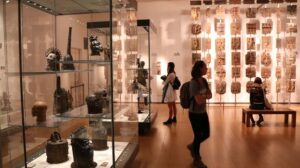 “Its decline began in the 17th century, sparked by internal conflicts linked to the increasing European intrusion and slavery trade at the borders of the Benin empire. Then in 1897, the city was destroyed by British soldiers,”

Oba Ovonramwen was then exiled to Calabar with two of his wives, Queen Egbe and Queen Aighobahi where he died in 1914. He was succeeded by his son, Eweka II whose grandson was Oba Erediauwa, father of the present monarch, Ewuare II.

The British Museum located in the Bloomsbury area of London was founded in 1753. Over the centuries of its existence, there has been a multitude of reports in and around it of, “inexplicable noises, spectral sightings, sudden drops in temperature including other strange happenings”.

It is infamously the world’s largest warehouse of looted treasures from the Eglin Marbles of Athen to Sheikh Uthman dan Fodio’s flag seized from Sultan Muhammad Attahiru I on July 27, 1903, at Mburmi (in present-day Funakaye LGA, Gombe State) but returned to Sultan Siddiq Abubakar III on November 6, 1960, in Sokoto by a detachment of the then 1st Battalion of Queen’s Own Nigeria Regiment.

The British took possession of that priceless fabric after killing and beheading Attahiru when he fled his capital against the backdrop of a massive British onslaught on March 15, 1903.

Is the ghost of Queen Mother Idia haunting the British?

Known as, Iyoba her pendant mask carved from ivory in the 16th century that the British refused to return for FESTAC ’77 also has a looted replica valued at $5 million by Sotheby’s in 2011 located at the Metropolitan Museum of New York. Idia was the mother of the 17th Oba of Benin, Esigie who was on the throne from 1504 to 1550;

“When the neighboring Igala people (in present-day Kogi State) sent warriors to wrest control of Benin’s northern territories. Esigie conquered the Igala, reestablishing the unity and military strength of the kingdom. His mother Idia received much of the credit for these victories as her political counsel, together with her magical powers and medicinal knowledge, were viewed as critical elements of Esigie’s success on the battlefield.”

Her full story has since 1974 been dramatically chronicled by Ola Rotimi the playwright of, The Gods Are Not to Blame (1968) in, “Queen Idia”.

Her pendant mask used as the replacement mascot of FESTAC is still on display at the National Museum, Onikan. It was carved by Felix Odunbor in 1976 from ivory soaked in undiluted palm wine. It took him 40 days to meticulously carve after General Obasanjo turned down the nearly $3 million request for the original at the British Museum to be transported back to Nigeria on loan.

Present-day Lagos was an entrepôt of the Benin Empire called Eko.

Why did the British deliberately raze Benin City to the ground?

First, it was a punitive expedition for the Royal Niger Company to take full control of the tremendously lucrative palm oil, rubber, and ivory trade.

Second, since the British were on a “civilizing mission” they could not tolerate an iota of progress or development that colonized people would use as a focal point;

“Benin City’s urban planning and design was done according to careful rules of symmetry, proportionality, and repetition now known as fractal design.

The mathematician Ron Eglash, author of African Fractals – which examines the patterns underpinning architecture, art, and design in many parts of Africa – notes that the city and its surrounding villages were purposely laid out to form perfect fractals, with similar shapes repeated in the rooms of each house, and the house itself, and the clusters of houses in the village in mathematically predictable patterns.”

“The entrance to the museum is free, but entry to the museum’s galleries and exhibitions requires a pre-booked timed ticket. A donation of £5 is recommended. There are admission fees for special exhibitions and some events.”

Perhaps the British are overall pushing the prohibitively high cost of keeping and maintaining controversial exhibits to their original owners.

As Mr. Shaw would say, “An Englishman thinks he is moral when he is only uncomfortable.”

That is why when the British greet you, “Good morning” be sure to consult your watch before replying – it might be evening!