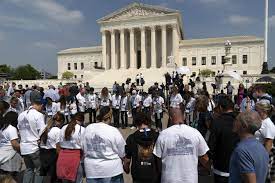 Demonstration outside US supreme court

Washington, DC – Late last year, US Justice Sonia Sotomayor asked whether the Supreme Court would survive the “stench” of perceived politicisation if it were to revoke the constitutional right to abortion in the United States.

For some critics of the top court’s conservative majority, the early answer is no.
“If we start to no longer believe that the rule of law is founded on principles, rather than the whims of politicians wearing robes, then we’re really no longer America any more,” said Subodh Chandra, a civil rights lawyer based in Cleveland, Ohio.

“We’re no better than a banana republic at that point.”
Chandra is amongst many legal experts and women’s rights activists who are already questioning the reputation of the high court after a draft ruling indicating the court would overturn Roe v Wade – the landmark 1973 precedent that made abortions legal – was leaked to the press on Monday.

The court confirmed the draft’s authenticity on Tuesday, but said it was not final. Still, the unofficial decision has sparked nationwide anger with critics arguing that overturning Roe would demonstrate that the court’s nine justices – six of whom were appointed by Republican presidents, including three by Donald Trump – are political actors, not impartial jurists.

“The larger issue that we should all be alarmed by is the sliding back of the US democracy, the dismantling of the rule of law, the slipperiness that now has been invoked within the court in terms of precedent … having very little meaning,” said Michele Goodwin, a law professor at the University of California, Irvine.
Goodwin said it is difficult to take the court seriously when justices follow such “dramatically drawn lines” that align with political parties’ ideology.
“Part of the American concern right now is that the court has perhaps been infected by the kind of political partisanship that we see in the legislatures,” she told Al Jazeera. “And that it’s kind of creeped its way into the Supreme Court, which is supposed to be unfazed, unmoved and unmoored or anchored to political party ideology and platform.”
Goodwin noted that when Roe was decided in 1973 in a seven-to-two ruling, it was backed by five justices appointed by Republican presidents.

Nearly 50 years later, with “pro-life” activism rising to the forefront of the agenda of the Republican Party, right-wing candidates have openly campaigned on appointing anti-abortion rights justices in an effort to overturn Roe.
Asked during a 2016 presidential debate whether he would want the Supreme Court to overrule Roe v Wade, Trump said: “If we put another two or perhaps three justices on … that will happen, and that’ll happen automatically, in my opinion, because I am putting pro-life justices on the court.”

In an unusual move earlier that same year, Trump released a list of conservative jurists as his potential picks to the Supreme Court. Supreme Court justices are appointed by the president for lifetime terms. They have to be confirmed by a simple majority in the Senate.

“There have been external pressures that the court should become more politicised,” Goodwin said. “We saw that in stark terms with the last president, Donald Trump, making quite explicitly that he would bring political ideology into the space of appointing federal judges. The movement wouldn’t be about qualifications, the ability to interpret law, about judicial temperament, but then it would be specifically around achieving certain political goals.”
The potential overturning of Roe v Wade comes in the context of a legal challenge to a Mississippi state law that bans most abortions after 15 weeks.
When Justice Sotomayor – a Barack Obama appointee – warned about the “stench” that revoking the constitutional right to abortion would unleash, she cited Mississippi politicians who had said the state’s anti-abortion law would be upheld due to the changing political makeup of the top court.
“Will this institution survive the stench that this creates in the public perception that the Constitution and its reading are just political acts? I don’t see how it is possible,” Sotomayor said.

Goodwin stressed that Roe is not merely a 49-year-old decision, but a precedent that has been repeatedly confirmed, including as recently as 2020 when the Supreme Court struck down a Louisiana state law that aimed to restrict abortion access.

But what changed between 2020 and 2022 is that liberal Justice Ruth Bader Ginsberg died and was replaced by Barrett, a staunch conservative. Although conservatives have had a 5-4 majority on the court for years, Chief Justice John Roberts has previously voted to uphold Roe as a precedent.
Earlier this week, Democratic politicians voiced concern about the standing and future of the court if it rescinds the right to abortion.

“Several of these conservative justices, who are in no way accountable to the American people, have lied to the US Senate, ripped up the Constitution and defiled both precedent and the Supreme Court’s reputation,” Speaker of the House of Representatives Nancy Pelosi and Senate Majority Leader Chuck Schumer, both Democrats, said in a joint statement on Tuesday.

Senator Lisa Murkowski, a moderate Republican, also told reporters that the draft decision “rocks” her “confidence” in the top court.
In his draft opinion, Alito argues that the landmark precedent must be overruled partly because the US Constitution “makes no reference to abortion”, calling for the issue to be resolved at the state level though the political process.
“It is time to heed the Constitution and return the issue of abortion to the people’s elected representatives,” he wrote, according to Politico’s leaked draft.

Chandra, the lawyer, dismissed both arguments, stressing that fundamental rights are protected by the Constitution to be shielded from political shifts and tyrannical majorities. “The whole point of rights is there are certain things governments can’t take away from us,” he told Al Jazeera.

“There are certain liberties the government can’t take away from us and subjecting ourselves to the prejudices of the tyrannical majority is precisely what the founders caution against. It’s why they created the Bill of Rights and why they referred specifically to unenumerated rights.”

The Bill of Rights – the first 10 amendments to the US Constitution – is meant to assert individual, legal and political rights. The Ninth Amendment states that not all rights are listed in the Constitution. It says: “The enumeration in the Constitution, of certain rights, shall not be construed to deny or disparage others retained by the people.”
Chandra added that overturning Roe and leaving abortion matters to the states would make fundamental rights unequal across the country.

“We’ll have a situation where someone in Texas is less free than someone in California, and Texas can retaliate against their own residents for daring to travel across state lines to exercise freedoms in
California. That’s where this is all headed,” he said.

For her part, Goodwin said the “overwhelming majority of rights that we hold dear” are not articulated specifically in the Constitution.

“The Constitution [enshrines] equality amongst all citizens,” she said. “Women and girls are citizens of this country and are to be afforded equality; they are to be afforded substantive due process and the recognition of their fundamental rights.”
While women’s rights advocates have focused most of their anger this week on the potential overturning of Roe v Wade, Republican ire has centred on the leaking of the draft opinion, which is unprecedented.
GOP Senator Ted Cruz said he was “flabbergasted” by the leak, speculating – without offering evidence – that “some angry left-wing law clerk” is behind it.

“This is the consequence of the Democrats’ rabidly partisan effort to undermine the court, to attack the court,” he told Fox News on Tuesday.

Chandra said the leak demonstrates how politicised the court has become, but he stressed that the real story is the draft ruling itself, not the fact that it was prematurely made public. “They are shouting ‘squirrel’, trying to distract us from just how odious the opinion is,” he said.
Lynne Rambo, a professor emerita at Texas A&M University School of Law, said the leak “increases the likelihood that the court will be seen as a political institution”.

“And that’s very bad for us – because the court is supposed to be an institution that’s free of political and public pressure,” she told Al Jazeera in a TV interview.

“Whether it will affect the justices’ deliberations in this case, I think there’s not a great likelihood of that, but in the future they will be aware that they are at risk of this kind of exposure and I do think that inhibits their discussion and ability to deliberate.”
(Al Jazeera)